Fastest Bowlers to Look Out for in World T20 Cup 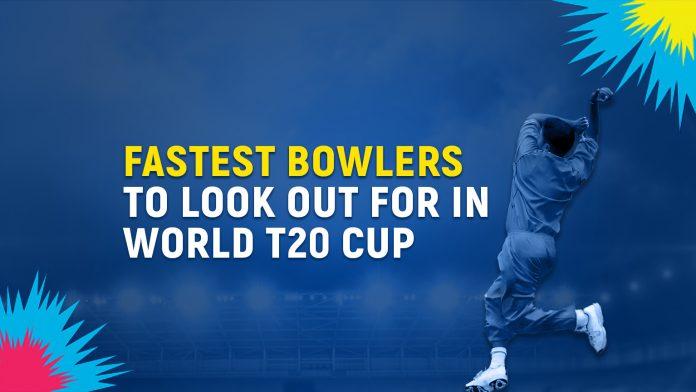 The 2022 World T20 Cup has officially begun! The biggest T20 fiesta will feature some of the best players currently in the game. The players are currently polishing themselves with practise/warm-up matches and the real battle is coming soon. Today, let’s take a look into who are the faster bowlers to look out for in World T20 Cup.

Australian pitches are brilliant to bowl on and players from across the globe love bowling on such pitches. This year’s edition of the World T20 Cup has some of the best bowlers this game has to offer.

Here’s the list of Fastest Bowlers in this World T20 Cup:

The Pakistani bowler always has some fiery deliveries in his arsenal. Rauf debuted for the Pakistan team in 2020 and since then, he has been the go-to bowler of the team. Rauf comes in at number 5 when it comes to the fastest bowlers on this list.

In 2022, Rauf bowled an absolute ripper at 155 kph in a match against England. What makes it interesting is that it was a T20I match and the Pakistan fans would like Rauf to make lives difficult for the batters on Australian soil.

Wood is arguably one of the best white bowlers in the world right now. Earlier this year, the 34-year-old English bowler bowled an express delivery at 156 kph in a match against Pakistan.

What makes Wood a dangerous bowler is his ability to not just bowl quick deliveries but also have full control of his line and length. Wood has just played 23 games in his T20I career but has taken 35 wickets.

The South African bowler A. Nortje turned many heads in the Indian T20 League when bowled a deadly delivery at 156.22 kph against J. Buttler during a match between Delhi and Rajasthan.

The 28-year-old pacer has experience on pitches like Australia and must be ready for the 2022 World T20 Cup. Nortje’s fast-paced deliveries will be a matter of concern for the batters. So far, he has played 24 matches and has taken 24 wickets in the process.

Ferguson’s speed made him a breakout star at the 2019 World T20 Cup. Ferguson regularly hits the benchmark of 150 kph; His recent performance in the Indian T20 League makes him a contender of the fastest bowlers in this year’s World T20 Cup.

In a match against Rajasthan, he bowled a delivery at the pace of 157.3 kph. The Auckland native has taken 163 wickets in his T20 career so far and has made the lives of many batters miserable.

There was no doubt that M. Starc would be in the number 1 spot on this list. M. Starc sits at number one with bowling a delivery at 160.4 kph in a match against New Zealand in 2015.

Starc has an abundance of experience in bowling on Australian pitches. The 32-year-old left-arm pacer has taken a whopping 237 wickets, out of which he has taken 70 wickets in T20I matches. With so many accolades under his belt, Starc is definitely one of the Fastest Bowlers to Look Out for in World T20 Cup.

So, these are the fastest bowlers to look out for in the World T20 Cup and these players will surely win matches for their teams. If you want to grab big winnings for yourself then MyTeam11 is the best platform for you! You can create your teams in the 2022 World T20 Cup and get a chance to win big! Keep playing, keep winning!