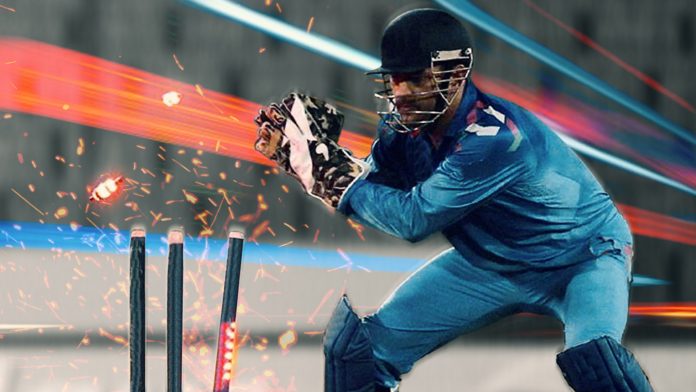 No matter how old a warrior gets, there’s no way he’d ever forget how to fight. MS Dhoni, the former captain of team India, is the perfect example for the mentioned quote. The player was being overlooked amid the squad selection by the authorities and was allegedly dropped from the T20 squad for upcoming matches against West Indies & Australia due to his deteriorating performance. But, you know time flips around unannounced & this time it has flipped in Dhoni’s favor.

The 37-year-old Indian Wicket-keeper, who is being considered as unfit to continue playing for the team shut everyone’s mouth in the fourth game of the 5 matches-ODI series between India & West Indies, on Monday. Captain Cool who is known to stump with the speed of light & finish the game with a victory like it is a cakewalk for him, broke his own record of fastest stumping.

The legendary keeper-batsman on Monday in the fourth ODI of the India vs West Indies series took only 0.08 seconds to dismiss West Indies player Keemo Paul by knocking the bails off. The stumping session was so fast that for once, Ravindra Jadeja who was bowling thought that the batsman wasn’t out. But, that victorious grin on the face of MS Dhoni depicted some other tale which ensured Jadeja that Dhoni’s fair sense of judgment can never be a matter of counter questioning. His smile means 110% surety.

It was the last ball of the 27th over when the event occurred, Paul who at the crease with a score of 19 runs failed to tackle the ball turning away from him. His failure to handle the delivery turned out to be a great loss for him as it was exactly the moment when MSD caught hold of the ball dismissing the player. Dhoni, with his latest achievement, surpasses his own record of effecting the stumps in 0.09 seconds, making the fastest stump timing stand at 0.08.

This achievement of the player looks like that he is not ready to get away with his position as a prominent player very easily but to take chances & let the world know he was, he is, and he will be the best. For fresh cricket updates keep looking at this space.