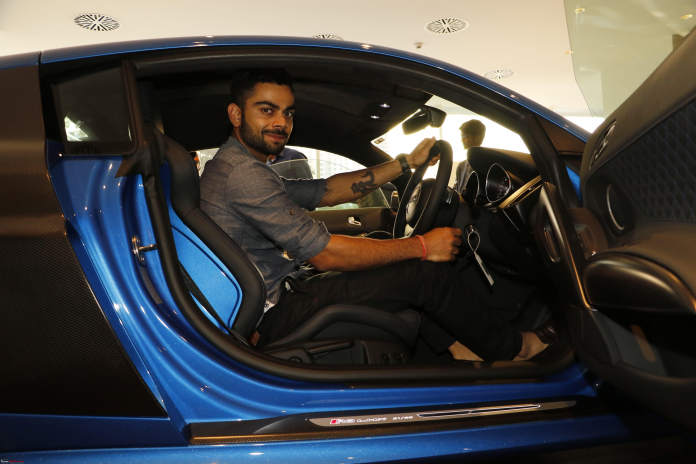 Indian cricketers are always seen creating a thunder on the field with the lightning fast speed but their supremacy & speed is not just limited to the field. The members of the blue army not only hold the potential to score rapid boundaries in the ground but are as fast as the speed of flash on the road too. As the old saying states, “Super-bikes and super-cars are the first love of boys,” the blue lions hold a never-ending love for the same. Let’s have a look at the hot wheels owned by famous Indian cricketers which when unveiled on the roads makes the environment hot.

Almost all of you might be aware of the longing that MS Dhoni holds superbikes and supercars. Captain Cool who is known for his leadership and strategic skills is a kid when it comes to bikes and cars. The Finisher is a proud owner of Ferrari 599 GTO, occupying a 6.0 L (5,999 cc) Tipo F140 C V12 engine.  The car is acclaimed to reach a speed of 100 km/h (62 mph) in just 3.2 seconds. The other gems in Dhoni’s collection of 10 cars and 20 bikes include a Hummer H2, a customized Scorpio and Mitsubishi Pajero amongst.

Virender Sehwag known for his destructive performance on the field is also said to have an old school love story with cars and bikes. The Multan of Sultan is known to have a never-ending love for hot wheels. Sehwag owns a Bentley Continental Flying Spur which is priced at a total of ₹3.5 crores. The other cars in his collection include a BMW 730Ld car.

Virat Kohli, as aggressive as he seems while on the field, wants his possessions to hold the same sort of aggression, thrill & speed. The present captain of team India, King Kohli, owns an Audi R8 LMX Limited Edition which seems to be a perfect fit for his unique personality. Marked at a price tag of ₹3 crores, the car comes packed with a 5.2 lt. capacity V10 engine capable of generating a power of 570 BHP. Others in the Kohli’s collection are Audi R8 V10, Renault Duster and a BMW X6.

The ‘God of Cricket’ who had always been the best on-field doesn’t want to settle for anything less but wants only top-notch players to be included in his intrinsic collections of cars and bikes. Master Blaster, as he is known, owns a top-class sports car from Nissan, the Nissan GT-R. Also, known as the Godzilla, the car is capable of going 0-100 km/h in just 2.9 seconds.

Suresh Raina is yet another power package that can create a storm on the field. Just like his capability of rowing down the opponents, the player owns a supreme collection of cars that are enough to take the roads and spectators by awe. Raina owns a Porsche Boxster Limited Edition, priced at 1.02 crore, the car looks a high-class choice when takes down the roads. Among his owned cars are a range rover, a MINI Cooper and a Mercedes-Benz GLC.

Rohit Sharma has already shown the love for his game and profession a lot many times on the field and cars are something he is equally passionate about, after cricket. The hit-man of team India is another player in our list who can be attributed as an extreme car lover. The love for cars is quite evident from the collection he owns. It is reported that the player possesses a BMW M5 series.

Yuvraj Singh, remembered for the six sixes he hammered in an over, has also managed to steal a place in our list. The player who battles cancer and was seen fighting opponents on the field is a crazy car lover. Yuvi owns a Lamborghini Murciélago, marked with a price tag of ₹3 crores, the car is known to home a 6.2–6.5 lt. V12 engine and is capable of going 0–100 km/h in just 2.8¬ – 3.8 seconds, depending upon the variant. The cars in his collection include Porshe 911, BMW M5, and an Audi Q5.

So, these were some of the supercars owned by some of the magnificent gems of the Indian Cricket team. The collection shows that cars are something our players are crazy about, apart from their first love, Cricket. We look forward to the new additions to this collection, till then you keep watching this space for more sports feed.