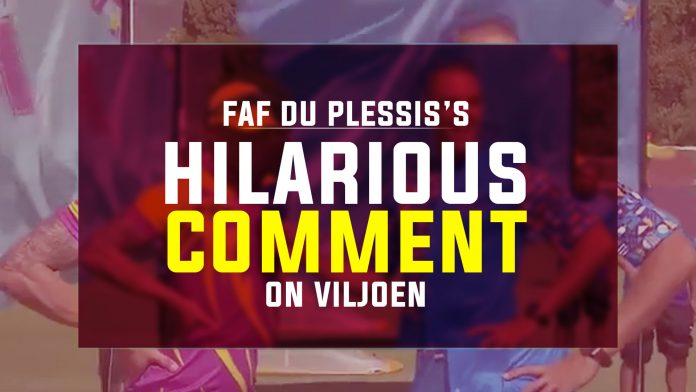 Paarl Rocks players never fail to grab headlines in the ongoing Africa T20 League. First, Tabraiz Shamsi showcased his magic trick on the field (touted as the greatest celebration style in sports history) and now, Plessis has garnered attention for his funny comment. Ahead of the clash against Nelson Mandela Bay Giants at Boland Park, Proteas skipper Faf du Plessis was asked about the team changes after Paarl Rocks lost the toss to NMBG.

Paarl Rocks captain displayed his humour side and said, “One change — Hardus Viljoen is not playing. He’s lying in bed with my sister. They got married yesterday”. His extremely honest answer left the broadcast commentator in stitches.

South African player Hardus Viljoen got married to Faf du Plessis’s sister Rhemi Rynners after one year of dating. So, being a generous captain, Faf allowed his brother-in-law to spend some quality time with his wife rather than fulfilling his duty against NMBG. Taking a jibe at his teammate (now brother-in-law), Faf gave this hilarious reply to the commentator’s question.

Usually, professional cricketers tie their knot in the off-season, it is surprising that Viljeon chose a day during the Africa T20 league, leaving the teammates on their own. However, Viljoen’s omission from the team didn’t cause any harm to Paarl Rocks as they secured a 12-run win over the Giants. On one hand, where Du Plessis scored 22 runs off 19 balls and helped Paarl Rocks achieve the target of 168/5 in the stipulated 20 overs. In response, the Giants managed to score only 156/6, with Heino Kuhn mustering the highest score of 58 runs from 43 deliveries.