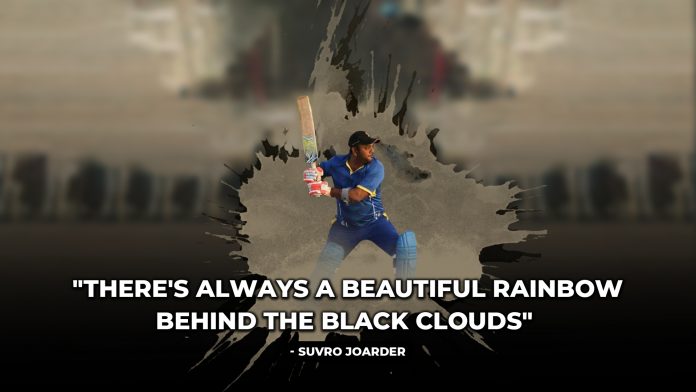 In the year 2008, when one legend was on a career wrap spree, another legend from Kolkata was gearing up to fill the soon-to-come void in the Indian National team. We are talking about none other than the Indian Cricket Legend Sourav Ganguly who announced his retirement in 2008 & Kolkata’s unsung hero Suvro Joarder who was getting ready to join the Bengal U-22 team.

Scoring 535 runs, picking up 22 wickets in just 9 CAB matches, Suvro was going hard and was at the peak of his club career. Soon to begin with a new chapter of his life as a crucial player for Bengal’s U-22 team, things took a disastrous turn for the budding legend when he met with a fatal accident where he, unfortunately, lost his right leg. The accident brought black clouds, but nothing could break down Suvro’s confidence, passion, and the zeal to play.

The player switched the route but not his goal. Not willing to give up on his dreams, Suvro got to know about artificial leg & with difficulties got himself one. From CAB to becoming the Captain of Indian Physically Challenged Cricket Team, he indeed achieved all of his dreams. Today, he is known as the World’s First Blade Cricketer, First Blade Runner of West Bengal and the First person to score a century in physically challenged T20 cricket. In a freewheeling interview, Suvro Joarder takes us through his memorable journey.

Q. How did you feel after defeating the ‘fit’ Singapore Cricket Club (SCC) 2-1 & grabbing the Allan Border Cup for Physically Challenged, 2018? Did the win boost the team’s confidence?

A. The victory was definitely a delightful one. But the Allan Border Cup for Physically Challenged that was held in 2018 wasn’t the only victory that we have clinched. Since my association with India Physically Challenged Cricket team, a lot of changes have been made in the team, a lot of victories have been achieved. The changes helped bring in proper co-ordination and bonding between the team. Winning is a very good habit, so yes, these victories do boost up the confidence of the players. Since, 2017, we’ve won around 90% of the series, and these series by series victories motivate us to enter the next championship stronger than before.

Q. Everyone is inspired by someone or the other in their lives. Who has been your inspiration in this memorable journey?

A. Sourav Ganguly, Dada, the name by I & almost everyone else in the nation calls him & Master Blaster, Sachin Tendulkar, they were the reason I developed a connection with the game. But as life would have had it after I met with the accident playing in a different format with an artificial limb became quite a tedious task, and a lot of people stood by my side then. So, giving credit to any one person is quite difficult. My doctors, my coach, and obviously my parents, friends, close relatives, contributed in their own way. And wherever I stand today is because of the contribution, support & love of these people.

Q. Only a champion can truly tell about his journey, struggles, and success. How has been your journey from playing 9 CAB matches to captaining Indian Physically Challenged Cricket team?

A. Before I met with the accident in 2008, my career in cricket was in a growing phase – receiving a lot of success. I received a call from the Bengal U-22 team, too. But the accident turned things upside down, ending my cricket career in just one night. However, what the accident couldn’t manage to break down were my hopes and will to play. After the accident, I picked myself up and decided to continue my playing journey. It took me 6-8 months to make a comeback, but at that time, too, I didn’t think about playing aggressively competitive matches or reaching any heights of success. It was just that if I cannot play competitive cricket, I can play just to satisfy my mind.

Meanwhile, Dada was making a comeback to domestic cricket with Ranji; it inspired me to pursue my passion. Slowly I started playing small leagues, local matches, friendly matches with the artificial limb and felt that I could make a comeback. I got to know about Physical Disability Cricket, but I was rejected due to I being 90% disabled. However, I was given a chance to play in one of the national tournaments organized by PCCAI and was adjudged as the Man of the Series. And then, after 1 year I was given a chance in the International match & after that, there was no looking back.

Q. Seeing the rise of players who have achieved glory for India over the years, people have started to take it professionally. Where do you see the Physical Disability Cricket going in the future?

A. Leaving aside disability, people watch sports for the thrill and competitiveness of the game. The competitive levels and standards of this format of the game are as high as normal Men’s or Women’s Cricket. We have bowlers that bowl deliveries at a speed of 130-135 kmph. The exposure is definitely less, & the disability tag doesn’t interest people much. So, it is necessary that the people should get to know about the competitive levels & visibility should be generated for this format of the game.

Q. Populous is getting inspired by you & your team’s journey. Do you think that the upper bodies should start looking after this format of the game too?

A. Yes, the upper bodies that govern the normal cricket need to look into the development and promotion of the Physical Disability Cricket. Considering the conditions of Physical Disability Cricket in other nations, the national governing body of cricket is responsible for the development of this format of the game. Lodha Committee’s report states that the Board of Control for Cricket in India needs to help the Physically challenged team, and I believe that it will be in scheme of things in years to come.

Q. Apart from cricket, running has also been a field of interest to you and off late, you’ve been seen participating in various marathons. Are such participation focused on becoming a better version of yourself or to set an example in front of the youth?

A. One thing is connected to the other. The disability tagline that got attached to me after the accident, I just wanted to get rid of it. I wanted to be the same person as I was before the incident. With limited availability of resources, I wasn’t getting the upgraded version of prosthetic limb; then a German company called Ottobock extended a helping hand. Thereon, began my running journey; I came to know that the concept of marathons is on the rise. Marathons receive major attention from the people, media & I thought it could become a medium to inspire or motivate people. Every now & then there are cases of amputation, I wanted that no one should face the situation I faced back in 2008. Thus, I started participating in these marathons for social awareness, to help them face such situations as a strong individual.

Q. After a three-day training session with Paralympic Gold medallist Heinrich PoPow, you completed a 50m sprint in just 6.5 second which is just half of the time required to qualify for the Paralympics. So, can we expect you to bring gold for India in the Paralympics too, in the coming years?

A. Frankly speaking, I don’t think that I will. Because to participate in the Paralympics, training is very necessary, and I doubt if we provide such training in India. At least in Kolkata, no such training is provided. Heinrich wanted me to practice and participate in the 2015 Rio Paralympics but due to lack of availability of sponsors that couldn’t happen. Also, I feel that now I am more occupied with cricket, with national, international and local tournaments, I don’t think I would be able to make it.

Q. Last question, we’ve heard Master Blaster, King-Kohli & we have heard World’s first Blade Cricketer. Would you like to give the young generation of our nation, any message?

A. I would not say that I am going to tell something new. I haven’t learned anything new in my life, but I have definitely implemented something that I’ve heard. If we are willing to achieve something, then success definitely comes to the one working hard. It’s just that sometimes things take time. It took me ten years to reach here. There were many people who demotivated me, calling me names, but time took a turn & today those people proudly say that ‘I know Suvro.’  Life is never easy; often you need to duck, defend but one you set on the pitch you can knock big scores.

"There’s always a rainbow behind the black clouds. Just wait for the right time, and the rainbow will surely shine.”