EXCLUSIVE: “Parent’s ideology needs to change because E-Sports is the next big thing in India,” says Lokmanyu Chaturvedi 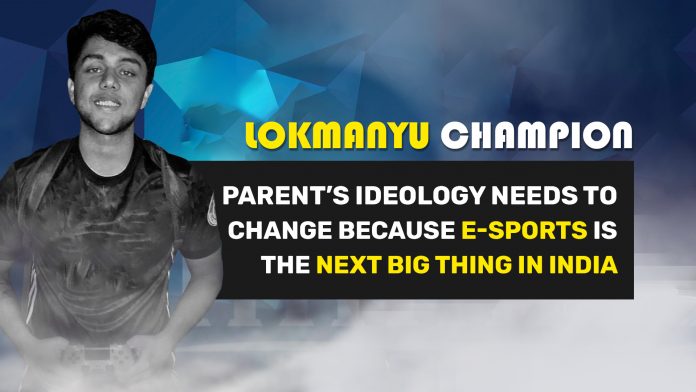 Lokmanyu Chaturvedi, a young professional E-Sports gamer from New Delhi, hopes to win the FIFA E-Sports World Cup and make India proud. At the age of only 23 when most of the youngsters are busy choosing their career options, that time Lokmanyu bagged over 35 awards. Being regarded among top 3 competitive gamers of the country, he spoke to MyTeam11 to share his experiences and journey as an E-Sports gamer.

Q. What generated a spark in you to build your career in E-Sports Industry

A. So, I was a casual FIFA player among friends, and I used to play it for fun then I heard about tournaments happening around in the city and I saw a lot of competitive players going for tournaments. Soon I realized that I am also pretty good at this and my friends pushed me to go and take part in these tournaments.

Q. From being an ordinary gamer to representing India at the professional level your journey must be incredible. Can you throw some light on your journey till now, the obstacles and challenges you faced?

A. The journey started with local tournaments and with time everybody started recognizing that this guy is best in New Delhi. Then I began to play at national level, where I reached semi-finals and finals. Then I came very close in the virtual Bundesliga also. So, all these things got me noticed among people. Following this I got an invitation from organizers in Malaysia because being among top 3 in the country, they saw my CV and invited me to play at international level where I represented India. The journey has been pretty good and competitive, and till now I have traveled to more than ten cities and played tournaments at different levels.

Q. Last week, you were invited as a Panelist at All India Gaming Federation. What was that federation about and how much did opportunity added to your confidence?

A. I got a call in the morning from the event coordinators that we would like to be our panelist. It was like a surprise to me because I have no prior knowledge about it and after that, I read about All India Gaming Federation; this is basically into policymaking for E-Sports in the country. They put all the policies in front of government to get support for it so that E-Sports becomes recognized as any other sports like Football, cricket, basketball, etc.

To be one of the panelist there was very good experience to me because all the other panelist alongside me has so much knowledge regarding E-Sports and my role was very crucial because they wanted to know the lifestyle of professional gamer, how a player practices the whole day, how he fights the traditional barrier to become a professional athlete.

I am only 23 now, and I was the youngest there, and when you get an opportunity to sit with such gamers, then it adds a lot to your confidence and gives you motivation to go for a bigger tournament.

Q. E-Sports is altogether a different industry so, what were your parents support in your journey?

A. My father was a tennis player, and he has represented India at International level during his days. Currently, he has his own Sports company named HTC SPORTS. So being a player, my father always supported me and gave motivation to go forward in Sports field.  Before entering E-sports industry, I was a footballer and represented Delhi as well in various tournaments. My Father always said just see if opportunities are coming. Inevitably there were tough times when I was losing; I had a dry period; people started saying to reconsider.

I think the most important thing is “parent’s ideology needs to change because E-Sports is the next big thing in India and within next couple of years it will a great revenue generator.” If anyone is passionate about it, then automatically it will help them to earn more than an engineer or doctor. Today, I represented India at International level, was invited as a panelist; all these things made my parents proud.

Q. Recently, MoAuba won FIFA E-Sports World Cup 2019. Does winning in such tournaments needs more determination, or is it same as ordinary championships?

A. No, of course not it’s not the same, you need a lot of determination to win in such big tournaments. Actually, in FIFA World Cup, a player plays 30 games in a week, and he/she has to finish among 100 in the world to qualify for online qualifier. After winning in online qualifier, they qualify for official EA sports events. The points system in both the consoles (X box and Play station) works like English Premier League. The top 16 from each of the console competes in the World. So to reach and play at that level is more complicated and challenging then playing ordinary games. It requires a lot of study; it’s not like PUB G, where anyone can pick up their phones and start playing.

So, the level of determination and intensity for playing in such big tournaments is no way near to local competitions.

Q. Currently, you are among the top 3 competitive gamers of the country. How are you improving to grab the first position?

A. 2019 has been a remarkable year for me till now. I am the only Indian player who has performed consistently in both local and national level tournaments. I was the runner up of the national competition held in Delhi last week.  However, on various occasions I felt short, will work on it and study more to come stronger in the upcoming tournaments. I think consistency is the key and I want to become the best FIFA player of the country and help all the other Indian players so that we can raise the Indian Flag.

Q. Lastly, what are your views about the current E-Sports industry?

A. E-Sports industry in World is getting developed day by day. In the Fortnite World Cup, a 16 years old boy won 20 crore rupees which is a huge amount. Nowadays, there are organizations, agencies that are giving salaries to E-sports players and the Football clubs like Manchester city etc. have their E-sports team. They hire players and give salaries to them. E-Sports industry is the most developing industry in the world, revenue is increasing in numbers. Lot of people are leaving traditional sports and getting into E-sports.

Although, India is step behind in E-sports but there are lot of federations and organizations that are working really hard to raise its standards in our country. Earlier Indian gamers were not given that much importance but today most of the players fly to abroad for playing. At last, It’s a blooming industry and in the coming years, it will gain more popularity.