Everything to know about Hundred’s Rules 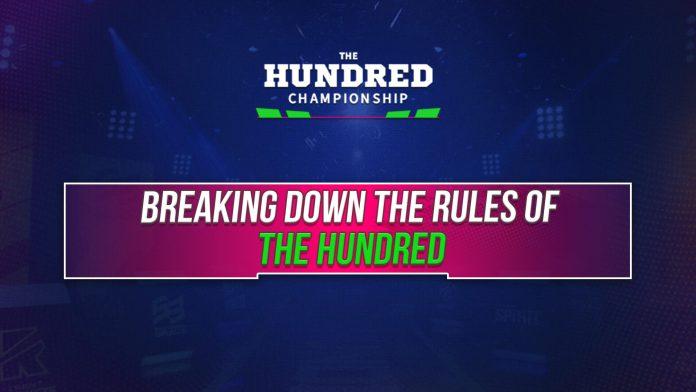 England Cricket Board came out with an idea of a different format with 100 balls. The first season was postponed last year due to covid but it will be back with its first edition from July 22. Eight teams will fight out for a title in England’s home summer. The Hundred will have 100 balls, 20 balls less than the T20 format. It might be a big change from ECB but will it evolve a big fan base? It will be seen in the next few years.

Ahead of this different format of the game, let us breakdown all the rules of The Hundred:

Eight city-based teams will participate in this tournament and it will also be a woman tournament along with Men’s. The best thing is you can see some Indian Women’s players participating such as Mandhana, Shafali, and Harmanpreet.

1.It will be a 100-ball tournament and whoever scores the most runs wins. Each team will play 100 balls and another team will chase it.

2.The fielding side change ends after 10 balls.

3.Bowler can bowl five or consecutive 10 balls. It means, there is no over. It’s a captain’s call how he tries his bowler.

4.Each bowler can deliver a maximum of 20 balls per game. In T20, we see a bowler delivering 4 overs of quota. They have made a slight change like the captain can easily use a minimum of 5 bowlers in one inning.

5.Like we saw in Indian T20 League, the Hundred will also have a strategic timeout of up to two and a half minutes.

6.The coach can walk out to the middle of the ground and discuss tactics with their players mid-game. It’s quite similar to Football where we see how managers talk to their players between the game.

7.The Hundred will also have a powerplay and it will be a 25-ball powerplay for each team. Two fielders are allowed outside of the initial 30-yard circle during the powerplay.

8.All teams to have 15 member squads and they can include a maximum of three foreign players.

9.At least one England Test player will have to be signed by each of the eight men’s teams and ECB made this rule compulsory to give their Test players a signing in this format.

11.If a match ends in tie, both teams will be rewarded one point each. If the game ends in a tie during the knock-out games, then it will be a super five when both teams will play five balls like we see in Super Over.

12.The table-topper will automatically reach into the final. The second and third-placed sides will meet in the semifinal game to reach in final.

13.Each team will play four home games and four away games. They will face each other once and one extra game will be a bonus match which will be played along with nearest regional rivals.

It’s a revolutionary approach from Cricket and it might create commercialism in this game. ECB is trying to promote this game on a larger scale. Each game will last for two and a half hours so they can engage the audience. Will it be a blockbuster like Indian T20 League or will it be a flop? All answered will be unfolded after two to three years.