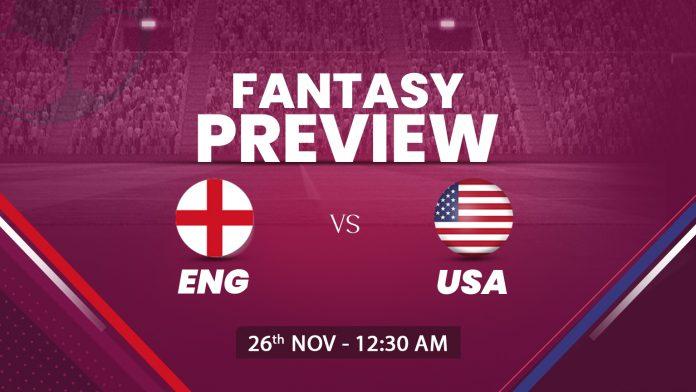 In the second match of Group B on Matchday 2, England will face USA. With a victory against the North Americans, England would book a place in the Round of 16. On the other hand, Team USA will require a positive result against the Three Lions to keep their World Cup hopes alive. Let’s look at the fantasy team prediction for the match and do read till the end if you want to see suggested fantasy XIs.

England, the 2018 semi-finalists, got off to a flying start in the 2022 World Cup. The Three Lions completely outplayed Iran and five different English players got on the scoresheet. However, manager Gareth Southgate would be concerned as captain H. Kane and defender H. Maguire limped off against Iran. Kane is just two goals short of becoming England’s all-time top scorer and could achieve the feat against the USA.

USA are currently the 16th ranked football team and started off their World Cup with a 1-1 draw against Wales. Most of the players in the USA squad ply their trade in England and are well aware of the potential of English players. USA are completely out of form and have just managed a solitary win against Grenada in the last 5 matches.

Al Bayt Stadium will host the second Group B fixture on Match Day 2 between England and USA. The stadium is the 2nd largest venue at the 2022 Football World Cup after Lusail Stadium. The match will begin at 12:30 AM IST on 26th November and lineups will be available at 11:30 PM IST on MyTeam11 fantasy app.

B. Saka (England): The 21-year old winger scored a brace against Iran and had a dream World Cup debut. England’s player of the season 21/22, Saka has 6 goal contributions including 5 goals in the last 6 matches. Saka’s pace, dribbling and pressing would be a major concern of USA’s full back Robinson in the next match.

T. Adams (USA): The captain of USMNT, Adams would be engaged in midfield tussle against Bellingham. Drilled by Marcelo Bielsa and Jesse Marsch, relentless pressing, tackling and defence threading passes of Adams can pose a major threat to The Three Lions. On the defensive end, he averages 4.1 tackles per game and on the offensive end he provides 1.1 key passes per game.