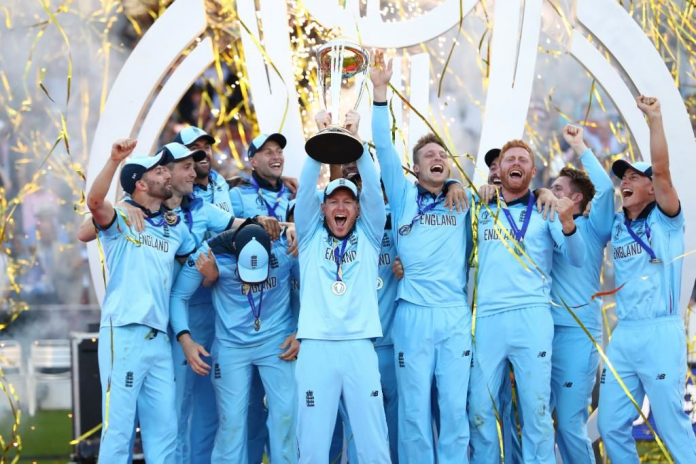 The World Cup tournament witnessed the most thrilling finals at Lords. Brilliant batting, sensational bowling, outstanding fielding and a super over were just not enough to decide the winner. Thus, the team hitting the most boundaries has been adjudged the winner.

It was the first super over of the One Day Internationals history and at the time which it came, made it even more exciting. A super over in the World Cup final, fans would not have expected anything more than this.

Before the starting of match, New Zealand skipper, Kane Williamson won the toss and elected to bat first. After Martin Guptill’s wicket in the 7th over of the innings, Henry Nicholls along with Kane Williamson stitched 74 runs for the second wicket to provide stability to the innings. But after the dismissal of Kane Williamson in the 23rd over of the innings, the Kiwis lost the momentum and lost two quick wickets. The innings then got impetus from Tom Latham, who scored 47 runs off 56 balls that helped New Zealand get a respective total of 241 runs in their 50 overs.

Reacting to the chase, the hosts, England, didn’t get a good start as they lost four wickets at the score of 86 runs in 23 overs. It was Jos Buttler and Ben Stokes ‘showTime which helped their team to bounce back in the match. Both of them added 110 runs between them. But Jos Buttler‘s

miscued shot off Lockie Ferguson in the 45th over once again opened the game. After this, England’s dream was all up to Ben Stokes, and he kept it alive till the final ball of the game.

Then came Trent Boult with the final over of the innings, England needed 15 runs to win. The first two balls were dots but still with Ben Stokes at the pitch; hopes were alive. In the third ball of the over, Stokes magnificent six followed by Guptill’s throw in the fourth over that gave away extra four runs turned the proceedings for England. Now with two needed from final balls, Stokes and his partner ran hard, but at the non-striker’s end, Mark Wood couldn’t cross the line, and the match was declared a tie.

England, who batted first in the super over gave New Zealand a target of 16 runs to emerge victorious. England posted this total due to Stokes and the man who put up a brilliant century-plus stand, Jos Buttler.

Jofra Archer, the man playing his first World Cup was given the responsibility to bowl the super over. James Neesham smacked a six over midwicket and with Martin Guptill, ran three doubles along with a wide. At this stage it looked New Zealand will win the match easily. Two needed to win off the final ball, Guptill played the shot on the leg side, while returning for the second run, fell short of his crease. Buttler took off the bails, and victory was sealed.

Follow MyTeam11 for updates and information about the latest Sports stuff.