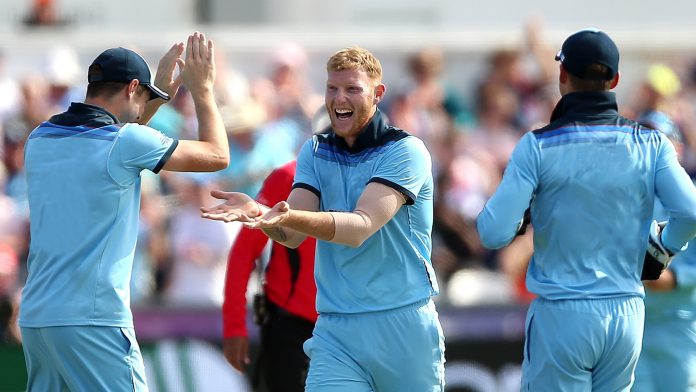 It took 27 years, but finally, England has reached the semi-finals of the World Cup. Before this, the team achieved this feat in the 1992 World Cup. In the 41st match of the ongoing World Cup played at Riverside ground between England and New Zealand, Eoin Morgan won the toss and opted to bat first. On the pitch that looked flat, England openers, Jonny Bairstow and Jason Roy once again gave the team a good start that laid the foundation of the massive total.

Both the batsmen stitched 123 runs for the first wicket to start the proceedings for the home team. Jonny Bairstow scored his second century (106) of the World Cup 2019 while his partner Jason Roy looked good for his half-century (60). However, the Kiwi bowlers took three quick wickets in the middle of the innings due to which the New Zealand team bounced back in the match. From 194/1, the England score became 214/4.

After this destruction, England skipper, Eoin Morgan took the responsibility on his shoulders and played a handy inning of 42 runs off 40 balls. In the end, due to the contribution lower order batsmen, Adil Rashid and Liam Plunkett, the hosts managed to reach a total of 305 runs in their 50 overs.

New Zealand, while reacting to the chase, didn’t get off to a good start. Once again, the team’s openers failed to perform. In the first over of the innings, Chris Woakes showed Henry Nicholls the pavilion way while Jofra Archer dismissed Martin Guptill in the sixth over of the innings. Now all the hopes were on New Zealand skipper, Kane Williamson but this time he also failed as the result of which all the batsmen after him fumbled. The only wicket-keeper batsman, Tom Latham managed to score a half century.

In the end, New Zealand team could not even play their full fifty overs and lost the match by 119 runs. All the England bowlers bowled economically, but Mark Wood picked up three wickets in his spell.

Jonny Bairstow was named as ‘Player of the Match’ for his dazzling century (106 off 99 balls).