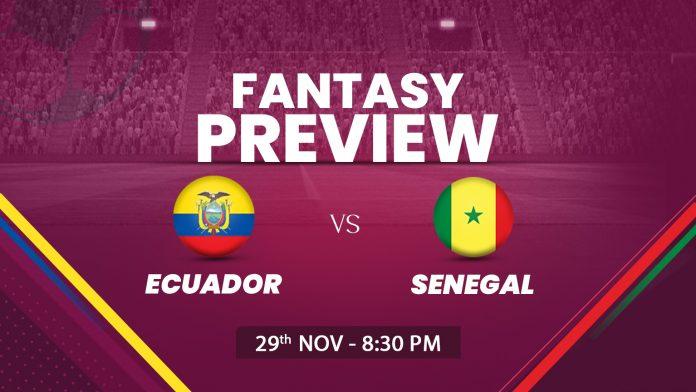 The Group A points table is becoming interesting with every passing day. Ecuador vs Senegal encounter will be a crucial one as both teams need to win the upcoming match to keep their qualifying hopes alive. The match will take place at Khalifa International Stadium at 8:30 PM IST. Let’s look at the fantasy team prediction for the match! Read till the end to see suggested fantasy XIs for the match.

Ecuador won the first match and tied the next game against the Netherlands. Even though the Dutch team is known for its defense, Ecuador’s E. Valencia managed to find the back of the net. However, Ecuador has to defeat Senegal to keep its hopes alive for this World Cup.

Senegal started its World Cup journey on a bitter note after suffering a 2-0 loss against the Netherlands. However, the Senegal team managed to bounce back in the last match against Qatar. Now, having lost a group-stage match, Senegal’s next match is a must-win against Ecuador.

In the last match, Senegal took 12 shots at the goal whereas only four shots were on target. B. Dia, F. Diedhiou and C. Dieng netted one goal each and helped the team grab a 3-0 victory against Qatar.

The 33rd match of the Football World Cup 2022 will take place at the Khalifa International Stadium, also known as National Stadium. The match between Ecuador and Senegal will begin at 8:30 PM IST. Ecuador is currently at number two at the Group A points table, whereas Senegal is at number three with three points to their name.

So far, the stadium has hosted four matches of the Football World Cup. The stadium witnessed a massive crowd during the match between Germany and Japan where the Japanese players defeated the Germans.

E. Valencia (Ecuador): The skipper of Ecuador is currently the joint top-scorer of the Football World Cup 2022. Valencia has scored three goals for his nation and shares the position with France’s K. Mbappe.

F. Diedhiou (Senegal): F. Diedhiou plays as a striker for his national team. In the last game, Diedhiou scored a goal. The 29-year-old striker is known for his dribbling skills and his powerful shots from outside the box.

So, what are you waiting for? Create your fantasy teams for Ecuador vs Senegal match on MyTeam11 and get a chance to grab Big Winnings and exciting rewards! You can also take advantage of the ongoing Football World Cup Carnival Offer on MyTeam11.