Did India try its best at the end to make the chase successful? 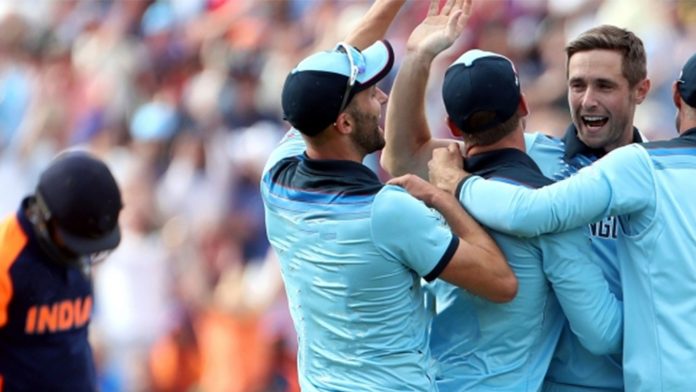 Some exceptional performances were needed to break the Indian team‘s relentless winning streak in the ongoing World Cup, and the Englishmen were the ones who showcased those performances.

England bowlers bowled brilliantly to thwart India’s pursuit of 338 runs target set by England. Although India lost the match at the end, the question is, did Indian team gave their best in the run chase in the last few overs of the innings?

In this match, the Indian team was in the run chase till the 46th over of the innings, but neither Kedar Jadhav nor MS Dhoni showed any intent to hit the ball in the final few overs. Chasing 338 runs, India required 71 off last five overs with five wickets remaining, but ‘lack of intent’ from both the batsmen didn’t even take the team anyway near to the total. In the situation when the asking rate was above 10, Kedar Jadhav and MS Dhoni were happily rotating around the strike without trying anything different.

Only three fours and a six in the final 30 balls of the innings with Dhoni and Kedar on the crease is hard to believe. Although even after this defeat, the Indian team‘s place in semi-final is almost confirmed. One win in the two left matches will ensure team India’s semi-final ticket.

This match reminded us of the 2011 cricket World Cup match between the same sides, but the only difference was England were the chasing team in that match. Apart from it, chasing 339 runs, the Englishmen were at the same position but somehow managed to draw the game. Their batsmen showed good effort and intent which Dhoni and Kedar lacked in this match.

Suppose if it would have been a must-win the game for India, then the results of this match might have been different.

The entire cricket fraternity criticized the duo’s efforts. Here are some tweets from cricket pundits about the same.

Batting first in a must-win the game, Jonny Bairstow and Jason Roy gave England a thumping start. Both the batsmen stitched 160 runs for the first wicket in just 22 overs before Ravindra Jadeja took a blinder at long on to show Jason Roy the pavilion way. After this, Jonny Bairstow didn’t stop and continued with the same flow to score his maiden World Cup century. The innings got impetus from Ben Stokes who smoked 79 runs off 54 balls with six fours and three sixes. In the end, England reached 337 runs in their 50 overs.

Most probably, considered as one of the better chasing team in the World, Virat Kohli’s men failed to prove that in this match. Despite the Hit-man’s third century and King Kohli’s fifth consecutive half-century of this tournament, Indian team fell short by 31 runs.

Jonny Bairstow has been named ‘Man of the Match’ for his sensational 111 runs innings.