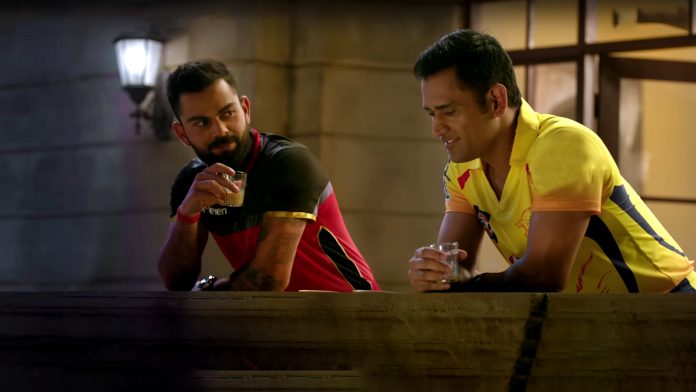 Dhoni and Kohli are as different as chalk and cheese, and this is perfectly captured by an IPL advert that shows the crowd is divided in yellow and red colors (CSK- Yellow & RCB- Red), half of them screaming Dhoni’s name and the other half shouting Kohli’s name. In the end, we can see these two maven players enjoying the show from a roof before challenging each other for the game on the 23rd. "Don't Be Late," says Dhoni to Virat Kohli in what promises to be a cracker of a contest between two top teams.

The official Twitter handle of Indian Premier League shared the advertisement on 14th March 2019 with their followers captioning it- “Dhoni, Dhoni, @msdhoni or Kohli, Kohli, @imVkohli? We can’t wait for this battle of the greats. Match 1 of #VIVOIPL between @ChennaiIPL and @RCBTweets #GameBanayegaName. “

IPL fever is rising, and this ad couldn’t have better timing. Both Dhoni and Kohli have a massive fan following but when it comes to IPL history, Virat Kohli's RCB, despite being strongest teams on paper, is yet to lift the IPL trophy whereas the CSK has won the title thrice. RCB will be hell-bent on proving their mettle against the defending champion in the first match and also, to end their title drought this season.

RCB roped in some good buys in this season’s player auction like Heinrich Klaasen, Shimron Hetmyer, Shivam Dube, Akshdeep Nath, and Prayas Barman. CSK, who took last season by a storm, will once again try their best to retain the title. All in all, the first encounter between the calm warrior and the fiery beast will be no less than an event.

As a mark of respect to the slain CRPF men in Pulwama Terror Attack, the IPL tournament will not have an opening ceremony this year. The Committee of Administrators (CoA) decided to donate the money set aside for the ceremony to the families of the CRPF personnel.