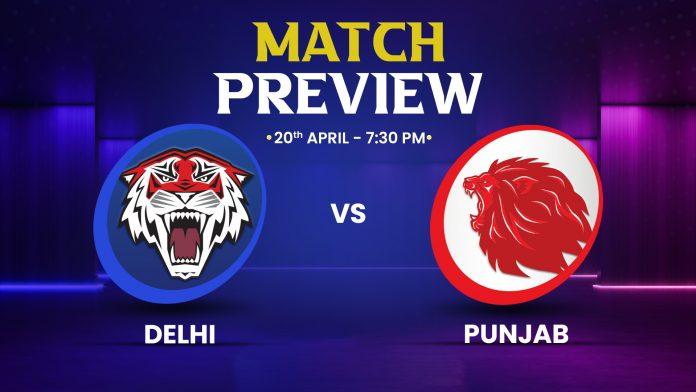 After a hazy cloud, the 32nd match of the Indian T20 League 2022 will be officially played at the Brabourne Stadium between Delhi and Punjab. Fans are eager to watch the match and learn about the playing 11 of the Delhi team as one of the promising players of Delhi, Mitchell Marsh, tested positive for Coronavirus.

The two teams will be locking horns against each other for the first time in this season. Punjab and Delhi are currently placed at 7th and 8th position in the points table as of now. This match will be very crucial for both teams as they aim to surge their position on the table. Delhi have played five matches where they managed to clinch victory in two matches. Punjab, on the other hand, managed to win three games out of six in this season.

Fnas might witness just two or three overseas players playing for Delhi in this match. Tim Siefert and Anrich Nortje might replace Mitchell Marsh in the upcoming match. Talking about the power and quality of the lineup, Delhi might face struggle in this match, which in turn, might put pressure on Prithvi Shaw and David Warner to do most of the work for the team.

The bowling lineup, on the other hand, is led by an army of good players like Kuldeep Yadav, Khaleel Ahmed, Axar Patel, and Mustafir Rahman.

Return of skipper Mayank Agarwal in this match will strengthen batting strategy for the freedom as other players like Shikar Dhawan will get a bit more freedom to strategize the game. Liam Livingstone is one of the top performers in the team in this season with an impressive strike rate at all stages. However, much stability is required in the lower middle-order with players like Shahrukh Khan, Odeon Smith and Jitesh Sharma.

On the bowling side, the pressure lies on the shoulders of Livingstone and Rahul Chahar. Punjab might shock the fans this time with a brilliant match today.

The weather in Mumbai has been ideal for cricket. The Brabourne Stadium is a great place to bat, and we’ve seen a lot of high-scoring contests here. There is also some assistance for new ball bowlers. Someone like Rabada, for example, could be able to extract more than the other bowlers.

We believe batting first will result in a score of roughly 170-180.

David Warner is a Delhi left-handed batsman. He’s already hit 131 runs in this tournament and will be one of the best fantasy choices.

Prithvi Shaw is a Delhi right-handed batsman. He has piled up 176 runs in this tournament so far, and he has the ability to score big runs in this match as well.

Delhi’s Rishabh Pant is a left-handed wicketkeeper-batsman. He’s hit 144 runs in this tournament so far, and he’ll be hoping to continue his success here.

Punjab’s Kuldeep Yadav is a left-handed batsman and left-arm chinaman bowler. So far in this competition, he has taken 11 wickets. For this game, he’ll be a safe bet.

Punjab’s Liam Livingstone is a right-handed batsman and right-arm leg-break bowler. So far in this competition, he has scored 224 runs and got two wickets.

Punjab’s Rahul Chahar is a right-handed batsman and right-arm leg-break bowler. He has so far taken nine wickets in this event and might be one of the leading point scorers.

Punjab’s Shikhar Dhawan is a left-handed batter. He’s already scored 205 runs in this tournament, and he’ll be looking to build on that momentum with another start today.

Punjab’s  Mayank Agarwal is a right-handed hitter. So far in this competition, he has 94 runs. He didn’t play in the last game, but he’ll be aiming to have an impact in this one.

Suggested Playing XI No.1 for Delhi vs Punjab MyTeam11 Team:

Suggested Playing XI No.2 for Delhi vs Punjab MyTeam11 Team: