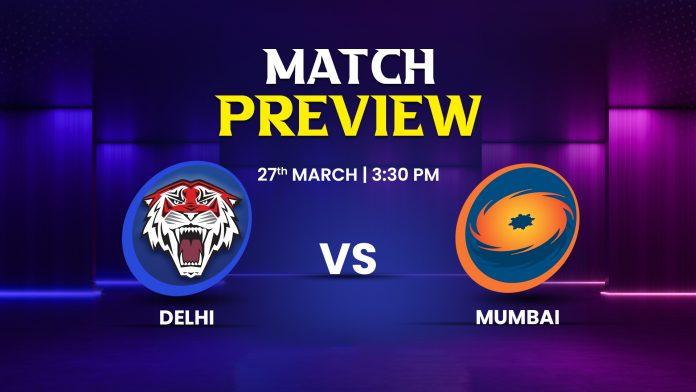 In this upcoming Indian T20 League 2022 encounter, two traditional rivals who have also done pretty well in the league in recent years will face off against one another. Both teams have seen significant changes, although their cores remain mostly the same.

Five of the Delhi Capitals' first-choice overseas players would be unavailable for the first two of IPL 2022 matches, which is a major problem. As a result, DC will have to make some adjustments and rely on some very inexperienced Indian alternatives. While Prithvi Shaw and Rishab Pant have shown to be match-winners, the rest of the batting line-up can be tested.

DC might struggle if five of their seven international players are unavailable, and their Indian substitutes are likely second-tier.

After their former roster was plundered by all the other teams, the Mumbai Indians had to review their team balance! Although several of their match winners have been purchased at exorbitant rates, we don't believe Mumbai Indians supporters need be concerned just yet. Mumbai Indians, the squad with the clearest auction plan, have a fantastic lineup once again. The top three players for this match will be Rohit Sharm, Ishan Kishan, and potentially Tilak Verma. This group may not appear to be as formidable as the MI we've seen in the past, but it has tremendous potential.

Mumbai's weather prediction is great. There will be no rain, but there will be a lot of humidity. As the lights begin to work, this might signify dew. The pitch should be great for batting, with plenty of bounce and carry. Because the Brabourne Stadium has larger boundaries than the Wankhede, the spinners have a chance.

Batting first, the par score at this location is roughly 170.

In the practice sessions and warm-up matches, Rovman Powell has been outstanding. In the Delhi unit, no one can hit the ball as hard as he can. Will he live up to the hype in this league? We'll have to wait and see.

Tim David made his Indian T20 League debut for Bangalore last year, but he struggled with the bat. He has, incidentally, a lot of experience playing for numerous franchises all across the world. In 89 T20s, he has scored 1965 runs at an average of 33.87.

Delhi retained four players earlier this year, including Axar Patel. He's a frugal hitter who can also score runs down the lineup.

Since 2010, Kieron Pollard has been a regular fixture of the Mumbai's lineup. He is well-aware of his own abilities and can swiftly adjust to changing circumstances. In his Indian T20 League career, he has scored 3268 runs with a strike rate of 29.98.

Lord Shardul Thakur may go for runs, but he is also a bowler with a flair for picking up wickets when he comes on to bowl for whichever team he represents. Last year, he took 21 wickets at an economy rate of 8.8 in 16 matches.

With the ball, Jasprit Bumrah is a lethal weapon for Mumbai. With 21 wickets in 14 games last season, he was the team's highest wicket-taker.

In this year's auction, Mumbai paid a record INR 15.25 crores for Ishan Kishan. The pocket-sized dynamo is a must-pick for your fantasy teams because he can hit the ball far.