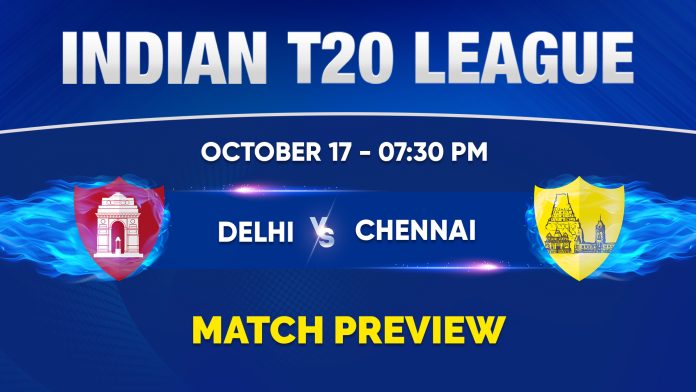 Chennai unites again to lock horns with Delhi in the second Saturday fixture of the Indian T20 League 2020.

After receiving smiles against Hyderabad in the previous game, Chennai set for a Delhi clash on Saturday. Dhoni played some moves to start with Sam Curran in the opening slot and he scored quick 31 runs. Extra spinner theory also worked for them and this time, Jadeja was also good in middle-overs. Chennai cannot take a break as every game is important for them. With the defeat of Rajasthan to Delhi, their points are now similar with two sides and they can crack the 4th spot code if they remain consistent. With changing the batting order, Dhoni tried to boost the middle-over and he may continue to pour the same thought in Sharjah. You won't be surprised if Chennai drops a bowler to pick extra batsman in Sharjah. Kedar Jadhav or Jagadeesan can replace Piyush Chawla to provide depth in middle-order.

Meanwhile, Delhi have injury concerns as the skipper was also injured in the previous game. Despite some errors in the start, Delhi bounced back to pull off a 13-runs victory against Rajasthan to tight their playoff game. The South African pace is giving them a big balance in death and the spinning duo Axar and Ashwin are controlling runs in middle-overs. In the absence of Pant, Delhi is missing the acceleration in death and if Iyer sits out in this game, Delhi would find themselves in big problem. Pant might take 2-3 more days to recover from the injury. Dhawan got back-to-back half-centuries but giving him the captaincy role would be a tough call if they already have two smart captains Rahane and Ashwin. On Sharjah, Delhi defended the total twice but without Pant and Iyer, the picture is now looking blurred.

From 31 sixes in the first game to just 10 sixes in the last outing, Sharjah’s surface is changed and it’s also favouring the bowlers as well. Chasing is not a master idea and the short boundaries can help to score at death only. Batsmen need to play sensibly to put runs on board.