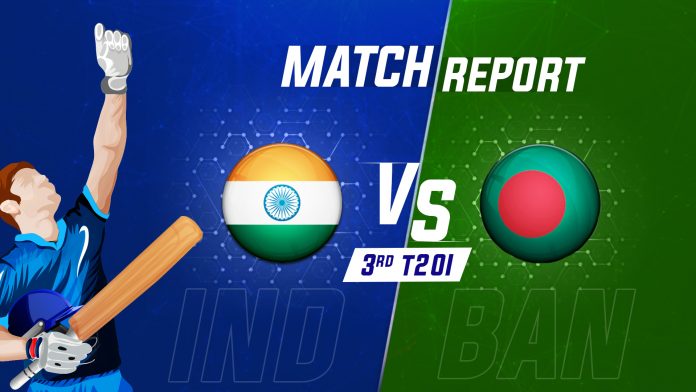 Deepak Chahar’s world-record six-wicket haul, which included a hat-trick, took India to a 30-run win against Bangladesh to clinch the T20I series in Nagpur. Deepak Chahar claimed sensational figures of 6/7 and a hat-trick in the last over after KL Rahul and Shreyas Iyer’s fifties helped India post 174/5. Chahar became the first Indian to complete a T20I hat-trick and collected the best ever figures in a T20I. Despite the presence of dew, Chahar bowled beautifully with perfect line and length as Chahar bowled 14 dots from his 20 deliveries. For his record-breaking spell, Deepak Chahar was named Man Of The Match and Man Of The series

Earlier in the evening, Bangladesh captain Mahmudullah elected to field after winning the crucial toss with the dew expected in the second innings. Bangladesh made one forced change with Mohammad Mithun replacing injured Mosaddek Hossain. India, too, included Manish Pandey in place of All-rounder Krunal Pandya.

Indian openers didn’t start well as Rohit Sharma, who was Man of the Match in the last match got out early. Shikhar Dhawan and K.L Rahul set the foundation as the pair added 32 runs quickly. After the wicket of Dhawan, Shreyas Iyer took charge and changed the course in the middle overs with a quickfire 62. Rahul, too, contributed with well made 52. Manish Pandey provided the finishing touches as India end up with 174 for 5 in their 20 overs.

Bangladesh innings started in one of the worst ways as they lost Das and Sarkar on consecutive balls. However, Mithun and Naim played brilliantly as they stitched a 98 run stand. Bangladesh were cruising along, but the star Chahar got the crucial breakthrough with the wicket of Mithun. After that, the middle order tumbled, and they go all out for 144. India also have Shivam Dube to thank for three significant strikes, including those of Mushfiqur for a first-ball duck and top-scorer Naim. Without that, India may have well been under the pump.

For Bangladesh, Mohammad Naim played an attacking innings of 81 from 48 balls. The batsman punished the Indian bowlers with his power hitting, smashing 10 boundaries and 2 sixes. But batsman couldn't finish it off as he got undone by Shivam Dube's perfect Yorker.

In the end, India sealed the series by 30 runs. With the T20I over, India will be looking for their 12th consecutive test series win at home as they face Bangladesh in the longer format. The first test starts on 14th November in Indore.