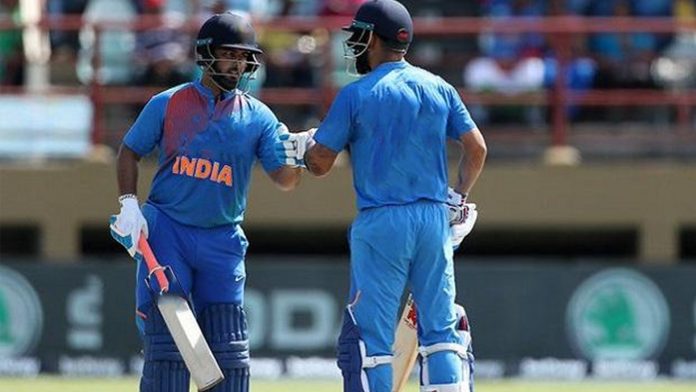 Before the final T20 International, there was immense pressure piling on Rishabh Pant, India's first-choice keeper who fell cheaply in the first two occasions, giving critics enough reasons to question his place in the side. However, in the final encounter of the series, Pant silenced in grand style with his superlative fifty and shared a partnership of 106 with Virat Kohli, who smashed his 21st fifty. Pant and Kohli's fifties, backed up earlier by a superb spell of 3/4 from Deepak Chahar helped India beat West Indies by seven wickets and achieve their second consecutive 3-0 clean sweep against the two-time World T20 champions in Providence Stadium on Tuesday.

The start of the match itself, though, was delayed by rain and a wet outfield for an hour but the superior drainage at Providence meant that no overs were lost. India chose to bowl and they rested Rohit Sharma and brought in Rahul Chahar for his debut. However, it was his elder brother Deepak Chahar who did all the talking on the cricket field and gave India plenty to smile with a superb burst at the start. Deepak removed Sunil Narine, Evin Lewis and Shimron Hetmyer in three overs as he ended with a spell of 3-1-4-3.

After this initial batting collapse, Kieron Pollard and Nicholas Pooran stitched 62-run stand for the fourth wicket that provided some stability to the West Indies innings. Navdeep Saini broke this partnership in the 14th over of the innings after dismissing Nicholas Pooran at the score of 17. In the end, West Indies managed to reach a respectable total of 146, courtesy of Pollard who played a crucial inning of 58 runs.

In chase, Shikhar Dhawan who looked out of touch in the first couple of games was dismissed cheaply. His counterpart, KL Rahul kept Indian fans on their feet with some delightful boundaries. However, after a solid start, perished for 20 to Fabian Allen. The responsibility was on the skipper, Virat Kohli and once again he anchored the chase beautifully for India. Both the batsman reached their half-centuries amid the partnership.

In the 18th over of the chase, Windies pacer Oshane Thomas dismissed Virat Kohli, but by then India was in total control in the run chase. Rishabh Pant and Manish Pandey completed the formalities to take India to a series win.

Deepak Chahar was named ‘Player of the Match’ for his exceptional bowling figures;3/4

Player of the series

Krunal Pandya bagged the ‘Player of the series’ trophy