Deepak Chahar: Tale of Self Believer 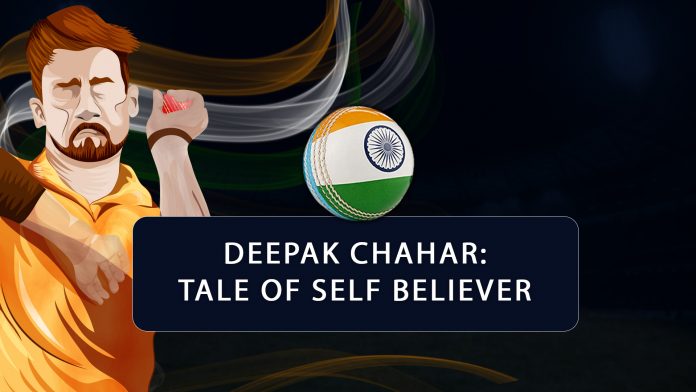 It was a night to remember for young Deepak Chahar as he claimed 6 for 7, the best-ever T20I figures in history, beating Ajantha Mendis' 6 for 8. Deepak Chahar was at his best as he dismantled Bangladesh batsmen with his lethal bowling. The paceman also became the first Indian to get a T20I hat-trick when he removed Shafiul Islam, Mustafizur Rahman and Aminul Islam in his last two overs to close off the Bangladesh innings.

Throughout the series, Chahar was used as a powerplay specialist, but his captain Rohit Sharma told him he would have a more flexible role this time as India were defending 174 in wet conditions, with an inexperienced attack and no sixth bowler. During the post-match presentation, Chahar said that the plan was that he would get the responsibility of bowling the main overs. The captain told him that he'd bowl the crucial overs, whenever the team needed him to bowl. And he was happy that he delivered.

The most impressive feature of his display was the control he showed over his variations. He bowled his knuckle ball and slower bouncer with precision, and to execute them so well with a wet ball was something else. Most of his deliveries were pitched either short or short of a good length. As a result, Bangladesh's batsmen never looked in control against this mode of attack.

India were in a spot of bother when Mohammad Naim took Dube's first two overs apart and had shown brilliant footwork to disturb the rhythm of experienced Chahal. That's when Rohit threw the ball to Chahar. Chahar responded brilliantly as he bowled closer to the stumps, not allowing Mithun to free his hand, and off the last ball, he bowled a knuckle ball floating away from off stump. Mithun reached out towards the ball and hit it over the covers but got caught comfortably by K.L Rahul.

After the breakthrough, it was all India as they bundled out Bangladesh to 144. Chahar took 8 wickets in the series with an average of just 7, which is the second-best for India in a series of three or more matches. R Ashwin's average of 3.88 against Sri Lanka in 2016 remains the best. Since his debut, Chahar has taken 13 wickets at an economy of 4.77 and an average of 7.40 from six matches. As Chahar rightly said after the game that it was indeed a dream that no one would even think of dreaming before sleeping.