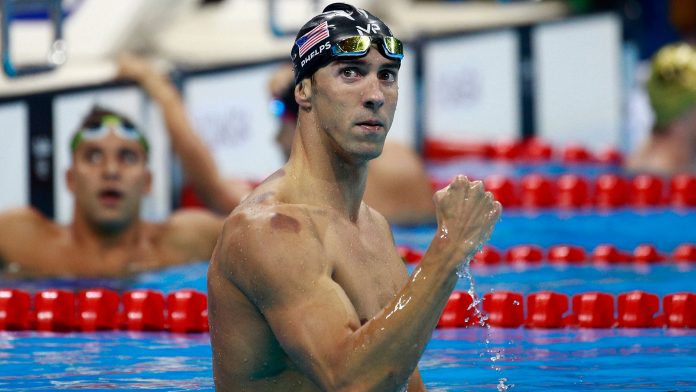 The recent season of the Indian Premier League is going on in full swing with each of the franchises making hard-efforts to stay at the top in the Points table. Well, IPL is not just about costly franchises & veteran international players playing with each other rather than against each other, but also about huge controversies, celebrities, debates, etc.

Popular for its huge fan-following & roping in numerous big names of Page-3, the on-going IPL season witnessed a latest addition to the list of its fans. Renowned Olympic Swimmer, Michael Phelps, on Tuesday visited the Feroz Shah Kotla stadium in Delhi to catch the action live between Delhi Capitals & Chennai Super Kings. Phelps who was in Delhi on Tuesday for some sort promotional event found IPL it a good chance to watch India’s biggest festival live & thus, the 23 gold medal winner decided to catch the game at the stadium in the evening, once through the promotional event.

Delhi Capitals who invited Michael through his sponsors took to their twitter handle to appreciate his presence. Delhi Capitals tweeted, “ICYMI: We hosted the most decorated Olympian, @MichaelPhelps at #QilaKotla for our first home game! Here's what happened when we had the man with many strokes on the front foot ;)”

This is the first time when Phelps is visiting India. The player reached the stadium after the game had already begun & spent about an hour at the venue. However, it is yet to be unveiled whether the player thoroughly enjoyed his time at the stadium while watching the game between Chennai and Delhi or found it be a bit boring.

The game between Delhi Capitals & Chennai Super Kings was one of its kind where Chennai took a dig at Delhi, defeating the hosts at their home ground by 6 wickets. Shane Watson of Chennai Super Kings bagged the Man of the Match title for his fascinating performance.