David Warner: The Highest Test Run-Scorer Of This Decade 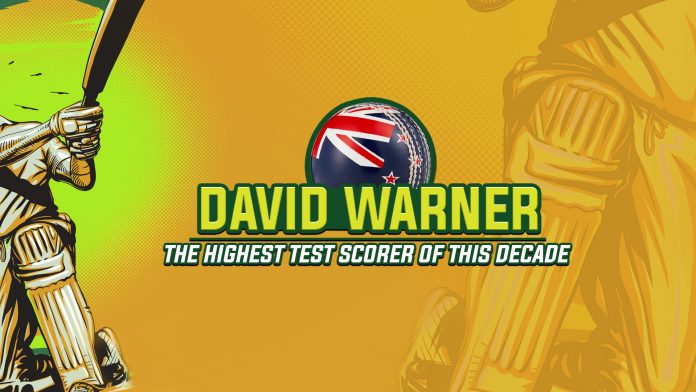 The second Test between Australia and Pakistan at the Adelaide Oval turned out to be one man show. David Warner, who roared back to form with his second consecutive 150+ score, converting it into a historic knock of 335 off 418 deliveries laced with 39 boundaries and a six. His maiden triple century in Test cricket brought worldwide admiration for his extraordinary performance.

As he raised his bat to dominate the field with his remarkable achievement, he notched the 31st triple century in Test history. With this milestone, David has not only registered his career’s best triple century, but attained the title of being the ‘highest Test run-scorer in Test cricket.’

The reigning star of this decade

It takes a significant amount of grit, technique and precision to score a hundred, a double hundred and a triple hundred in Test match cricket. However, a few of the prolific players have attained this mammoth accomplishment multiple times. Australian dynamite David Warner is the latest entry to the world record books.

In all these years, David has established himself as the one of the finest all-format openers across the globe. After racking up his landmark score recently, Warner called himself “a testing guinea pig” while taking dig at Australian selectors who had named him “an experimental guinea pig” earlier. The left-hander had not appeared in a test game and later, he was handed a test cap because of vacancy at the opening slot. A decade later, Warner turned out to be a T20 specialist with astonishing numbers across all formats.

With this feat, David managed to register a couple of more records to his name. The 32-year-old has become the first Test Centurion since December 2016. Apparently, his score is also the second-highest Test score by an Australian, only after Matthew Hayden’s 380. When he reached 254, his score emerged as the highest score by an Australian opener since Hayden’s 2003 knock against Zimbabwe. He is entitled as thethird Australian to muster more than one 250+ Test score, after Don Bradman and Michael Clarke.

His Batting and Fielding Averages

David Warner joins the ranks of the world’s greatest batsmen

Warner’s unbeaten 355 now secures the 10th position in the list of the highest scores in Test cricket of all time. The point to be notices is that had he been allowed to score six more runs, he would have amassed three more spots and stood at No. 7. But unfortunately, Australian captain Tim Paine declared the innings and Warner had to finish his compelling score. Warner went past Sir Don Bradman’s 334 but failed to reach his quadruple ton, leaving his side with a total of 589-3.

The revised list of the top 10 individual scores of all-time in Test cricket is as follows: