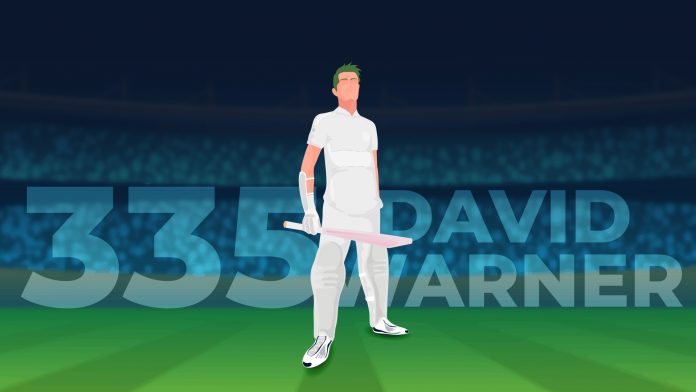 Australia star sensation David Warner scripted history on day 2 of the Pink Ball Test against Pakistan in Adelaide as he smashed his maiden triple ton to let journalists around the globe get to work. Warner, who had managed just 95 runs in the five Ashes Tests in England, roared back to form in grand style with a magnificent century in the first Test in Brisbane as Australia won the match by an innings and five runs. In the second Test, Warner looked in total command and punished the Pakistan bowlers as he continued his purple patch against them.

When Warner drilled Mohammad Abbas straight down the ground, the right-hander entered a special club of batsmen who have scored triple centuries in Tests. In the course of his knock, Warner smashed plenty of records. This was the first time that a batsman had scored a triple century at the Adelaide Oval. The previous best was an unbeaten 299* by Sir Don Bradman against South Africa in 1932. Warner also became the second Australian to score a triple century in Tests in Australia after Matthew Hayden smashed 380 during the Perth Test against Zimbabwe in 2003. The left-hander also became the second Australian player after Mark Taylor to hit a triple ton against Pakistan. Mark Taylor had smashed 334 in 1998 at Peshawar.

When Warner blasted a six and a four off Mohammad Abbas, he went past Azhar Ali's tally of 302* which was the previous highest score in a Day-Night Test. Azhar, the current skipper of the Pakistan cricket team, had achieved this feat during the Pink Ball Test against the West Indies in Dubai in 2016. Warner continued to notch up milestones and he went past Taylor and Bradman to finish with an unbeaten 335 as Australia declared on 589/3, which is the highest score in Pink Ball Tests.

Warner reached his fifty on day 1 in streaky style when an overthrow resulted in six runs. Labuschagne notched up his half century with a couple of boundaries off Musa and Yasir Shah as Pakistan struggled. After the dinner break, Warner continued to find the boundary on a regular basis and he reached his century with a tap to backward point. Along with Warner, Labuschagne also grew in confidence and he neared his century with two boundaries off Musa, who was having a nightmare debut. Labuschagne entered the 90s with a couple of fours off Yasir Shah and he reached his landmark by working a legbreak to midwicket for a couple.

On day 2, Warner was caught off the bowling of Muhammad Musa but once again, the debutant pacer overstepped and just like Naseem Shah in the Brisbane Test which meant that destiny wanted him to script something special and he was robbed of a maiden wicket due to a no-ball. Warner continued his dominance and despite some streaky edges, he did not give Pakistan a chance to build pressure and he calmly went past each and every landmark in style. However, he will be certainly kicking himself to not go for 400 – which at that stage looked more than just pragmatic.