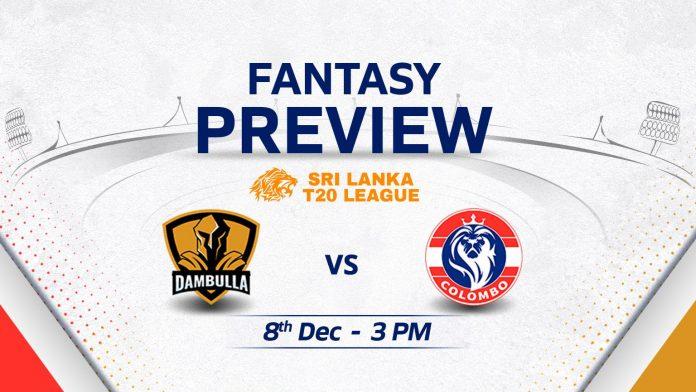 The 5th match of the Sri Lanka T20 League will be played between Dambulla and Colombo at the M. Rajapaksa International Stadium. After a poor start to their campaigns, both Colombo and Dambulla will be looking to register their first win and get their season back on track. Let’s look at the fantasy preview for the match and read till the end if you want to see suggested fantasy XIs.

Dambulla struggled in their previous match against Jaffna and will be looking to turn things around. The team will be hoping for a strong performance from their key players like B. Rajapaksa and all-rounder S. Raza. The team will also rely on their bowlers to keep the Colombo batters under control.

Colombo began their campaign with a comprehensive loss against Kandy and will be looking to start afresh against Dambulla. The team will be led by A. Mattews and rely on star players like D. Chandimal and veteran all-rounder R. Bopara to make an impact. The team also has seasoned bowlers like S. Lakmal and T20 specialist K. Paul.

The match between Dambulla and Colombo will be played at the M. Rajapaksa International Stadium. The match is scheduled to start at 3:00 PM on 8th December 2022.

The pitch at the M. Rajapaksa International Stadium is known to be a good track for batting and also offers assistance to bowlers in the initial overs.

Partly cloudy conditions are expected on Thursday in Hambantota with a high of 31 degrees Celsius and humidity at around 65% later in the evening.

B Rajapaksa (Dambulla): Despite a poor outing against Jaffna, Rajapaksa is a dynamic batsman capable of aggressive and powerful strokeplay. Rajapaksa is also an excellent fielder and adds value to his team’s performance on the field.

R Bopara (Colombo): Bopara had an off day at the office against Kandy on Match-day 1. The versatile, veteran batsman is known for his calm and composed demeanour at the crease. He is also a capable stroke maker and has the ability to adapt to different situations, especially in the T20 format.

Join MyTeam11 now and take part in the exciting Sri Lanka T20 league. MyTeam11 offers exciting offers and discounts to users, instant withdrawal and 24*7 customer support for a seamless user experience. So what are you waiting for? Start Playing and Start Winning!