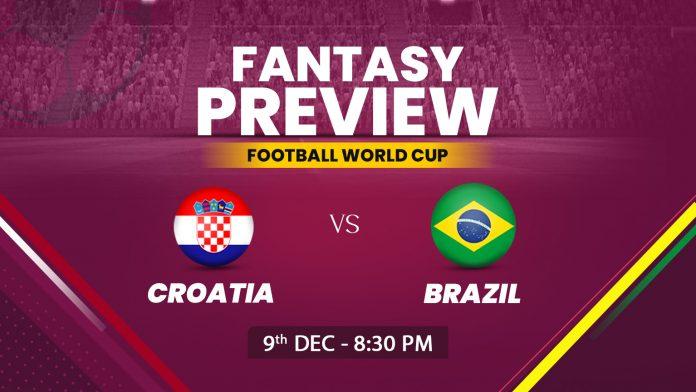 In Match 57 and the first quarter-final match of World Cup 2022, Croatia and Brazil will face each other at the Education City Stadium. Croatia, the runners-up in the 2018 World Cup, will be looking to continue their impressive run and make it to the semi-finals for the second consecutive time in their history. Brazil, on the other hand, is one of the favourites to win the World Cup and will be looking to put in a strong performance to advance to the semi-finals for the first time since 2014.

Croatia has impressed in the tournament so far, with their skipper Luka Modric, winger I. Perisic and goalkeeper D. Livakovic played key roles in all their victories. The team has shown strong defensive integrity, conceding just two goals in their four matches. They will be looking to use this solid defence to keep Brazil’s attack at bay and create chances for their own forwards to score.

Brazil, known for their attacking style of play, has scored 7 goals in their four matches so far. The team has excelled in defence, their forwards have been superb and the team has shown excellent play in offensive and defensive transitions. Brazil will be relying on its attackers to break down Croatia’s defence and score a flurry of goals just like in the Round of 16 fixture against South Korea.

Education City Stadium will host the first quarter-final of the tournament between Morocco and Spain. The 40,000-seater stadium will serve as the training base for university teams in the Education City complex in Doha. The match will start at 8:30 PM IST on 9th December and lineups will be available at 7:30 PM IST on the MyTeam11 fantasy app.

M Brozovic (Croatia): Croatian manager Z. Dalic will hope his experienced midfielder can stop Brazilian superstar Neymar Jr in his tracks. Brozovic is a tenacious defensive midfielder with a very high defensive and offensive work rate. On counter-attacks, he has the ability to play line-breaking passes. He will be the one player key to Croatia’s success in the quarter-final against the Selecao.

A Becker (Brazil): A. Becker, the Brazilian goalkeeper, will need to be at the top of his game against Croatia. The 30-year-old has kept two clean sheets in three appearances and has shown his ability to make crucial saves to keep his team in the game. In the next match, Becker will need to continue his strong performance and maintain focus in order to keep a clean sheet. His agility and quick reflexes will be key in dealing with Croatia’s attacks and helping Brazil to advance in the tournament.

It’s time for you to join football action from the World Cup quarter-finals from 9th December on MyTeam11. Make your fantasy teams on MyTeam11, take part in mega contests, hot contests and head-to-head contests and stand a chance to win big cash prizes. So, stop waiting and START PLAYING!