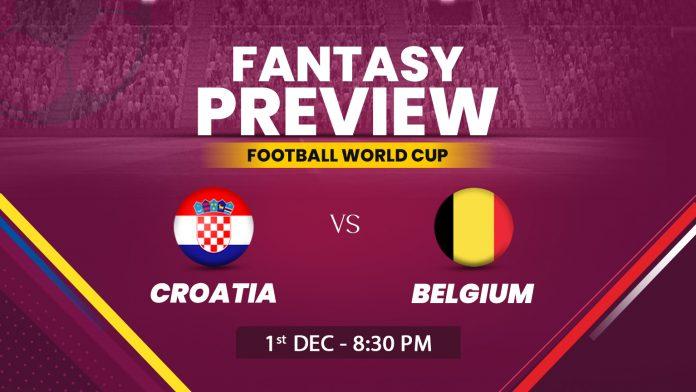 Belgium’s loss in the last match ended a 13-game unbeaten run in group-stage games at the Football World Cups. At the brink of elimination, The Red Devils will go face-to-face against the in-form Croatia in their last group-stage match. Croatia vs Belgium match will take place at the beautiful Ahmad Bin Ali Stadium. The match will kick off at 8:30 PM IST. Read till the end to find out the fantasy team prediction for the match and fantasy XIs for the match.

The Checkered Ones are sitting comfortably at the top of Group F. After ending the match in a goalless draw against Morocco, Croatia bounced back after an impressive 4-1 against the brave Canadians. A win against Belgium in the next match will make things easy for the Croatians and they can move further in the tournament.

Belgium is facing the threat of getting eliminated from the Football World Cup 2022. The World Cup favourites are currently number three in the Group F points table. The Red Devils won their opening match against Canada. However, the team lost their last encounter against Morocco, all thanks to two late goals from R. Saiss and Z. Aboukhlal

The Ahmad Bin Ali Stadium will host the exciting match between Croatia and Belgium. The stadium holds the capacity to host over 40,000 fans. Recently, the stadium witnessed an all-time high attendance during the match between Wales and England (42,324 fans). The match will start at 8:30 PM IST on 1st December.

L. Modric (Croatia): The Croatian skipper did wonders for his national team in the last Football World Cup campaign. Modric is considered one of the best all-time midfielders of the game. His shooting, passing and dribbling skills are second to none in the game.