Cricket at mercy of climate 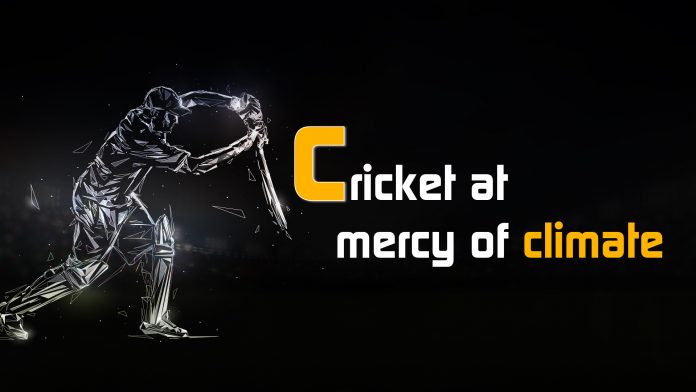 Who says gentleman’s game is all things fun? That’s not exactly how you will picture the scenario when you get acquainted with the real-time circumstances. Imagine a situation when the entire team sweat it out for a month for an upcoming match and weather wreaks havoc on them. Nature has the power to disrupt any sport, and we can’t deny the fact that cricket ecosystem has always been a victim of bad weather.

An unforeseeable natural phenomenon labelled as the Act of God is beyond anyone’s control and therefore, in cricket, climate is one factor that changes the course of play in no time. If climate change is not in the hands of cricketers, then how do they manage to survive under unfavourable climatic conditions.

How climate affects the pitch?

The weather conditions along with the toss determines the result of a cricket match. Clear blue sky is always a relieving sign for the batsmen, as the ball does not swing that much. But seam bowling becomes a concern when the scorching sun hits hard at the pitch as it takes all the moisture away from the pitch, making the ground a batsmen’s paradise.

On the other hand, murky weather can assist the bowling side. When there are chances of rain or the humidity levels are high, then bowlers take advantage of it as the pitch has lots of moisture and takes long time to dry out. It is quite an opportunity for bowlers to take on the batsman under overcast condition.

England has the most unpredictable climate

History has it, whenever the match is conducted on the British soil, it is most likely to get ruined by rains. The UK’s largest climate change action group, Climate Coalition, had stated that cricket is a sport that is the hardest hit by climate change in England. As per the reports, wet winters and more intense summer downpours disrupt the game at every level.

In the 1930s, county cricket clubs in England were under a financial loss after a season of prolonged wet summers. After 20 years, the clubs experimented with blankets, rubber mats and suction machines to survive in the persistent rains.

The rate of rain-affected matches has multiplied several times since 2011, with five per cent of matches abandoned completely. As a result, 27 per cent of England’s home one-day internationals since 2000 have been played with reduced overs due to rain delays.

Glamorgan County Cricket club’s Head of Operations, Dan Cherry, warned that climate change could "fundamentally change the game". He suggested, “The less cricket we play, the fewer people will watch it, the less they will come to the ground and pay to enter, the less chance there is for young people to be inspired".

The wettest World Cup in history

One of the most recent examples is World Cup 2019, which was held in England and Wales. Till 14 June, four out of 18 matches were washed out due to rain and it turned out to be the wettest series ever since 1975 when the first such tournament on the British soil. Twitterati reacted to this constant climate change in England that was affecting the pitch conditions and questioned the authorities – why England is even allowed to host the World Cup in the first place, despite pathetic weather conditions.  In its defence, the council blamed the weather, calling it an “unreasonable” phenomenon.

Whenever climate influences the match badly, there’s always one thing that people say to the cricketers, ‘Better luck next time.’ But we don’t realize that rain showers can swish away month-long hard work of a player prior to the game, as every game is an opportunity for them and unfortunately, they lose one because of the climate change.