Chris Gayle Not to Accompany West Indies for ODIs; Opts to Take a Break from Cricket 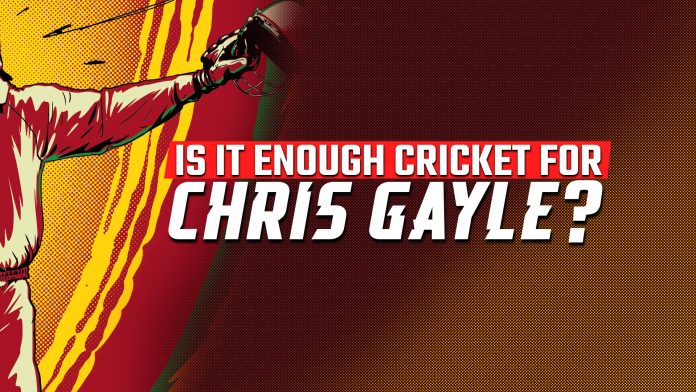 After visiting India for a 2-game Test series, the Caribbean Giants are all set to travel back to India for a series comprising of 3 ODIs and 3 T20Is.  The series is all set to begin on December 6 with the ODIs played first, followed by the T20Is. Where there is a lot of hype regarding upcoming India vs West Indies series, another news of Chris Gayle taking a break from cricket has been doing the rounds.

As per the recent reports, the 40-year-old batsman was called-in for the ODIs, but he refused to be a part of the upcoming series.

"West Indies called me to play ODIs, but I am not going to play," Gayle said. "They want me to play with the youngsters, but for this year I am going to take a break."

It is not just the upcoming ODI series against India that the player has refused to play, but he will also not be seen in the upcoming Big Bash tournament, scheduled to happen in Australia.

Also Read: MS DHONI SETS EYES ON IPL 2020; YET TO DECIDE HIS FUTURE IN INTERNATIONAL CRICKET?

The player had an awful MSL season where he played for the defending champions Jozi Stars. He played six innings where he could manage to pull-off only 101 runs. The player even went on to lash out on the critics as said that no one gave him any respect when he failed to perform.

"As soon as I don't perform for two or three games, then Chris Gayle is the burden for the team.

"I am not talking for this team only. This is something I have analyzed over the years playing franchise cricket. Chris Gayle is always a burden if I don't score runs, two, three, four times.

"It seems like that one particular individual is the burden for the team. And then you will hear bickering. I am not going to get respect. People don't remember what you have done for them. I don't get respect," he added.