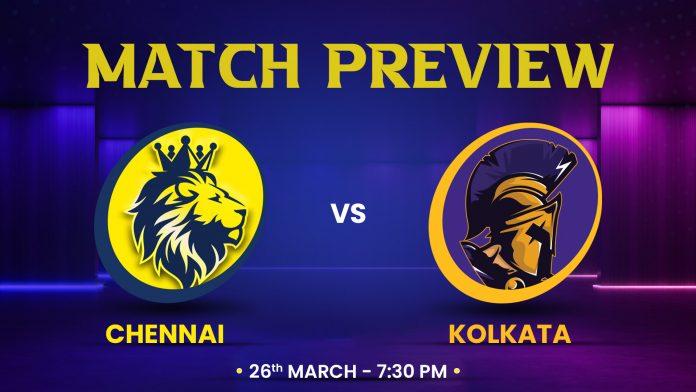 The 15th season of the Indian T20 League will begin on March 26 with an encounter between Chennai and Kolkata. Both clubs last played in the Indian T20 League final in 2021, with Chennai winning the title for the fourth time. With a new season upon them, both teams will be looking for stability. The game will be held at Wankhede Stadium, allowing the hitters to enjoy their experience in the batter’s box. Chennai has a strong head-to-head record and will enter the match as underdogs.

MS Dhoni unexpectedly stepped down as captain and will continue to play for Chennai as a player, leaving Ravindra Jadeja with big shoes to fill. Moeen Ali, an overseas star, arrived on Thursday and will miss the opening. Ruturaj Gaikwad, who won the Orange last year, will try to continue his winning streak this year. The squad management has relied on seasoned campaigners once again, thus there are a number of older players this time around.

The Kolkata Knight Riders, on the other hand, had a different approach in the blockbuster auction, acquiring interesting players. Captaincy responsibilities have been entrusted to Mumbai’s Shreyas Iyer. Along with Venkatesh Iyer, Ajinkya Rahane is expected to open. They have a 1-4 win-loss record versus CSK in the previous five encounters and are looking to narrow the gap. Defeating the holders CSK might give this new-look KKR team the boost they need.

Wankhede Stadium has played home to a number of memorable matches in the past. On this surface, hitters have historically appeared more at ease and have faced less obstacles. The middle overs will be dominated by spinners. It’s not simple to keep the score down here, so bowling first is a smart idea.

After being retained by Chennai, Ruturaj Gaikwad has a lot riding on him. In the previous iteration, he was always attractive to the sight and routinely scored runs. With 635 runs in 16 matches in the previous edition, he was the leading run-scorer.

In the all-spot, rounder’s Ravindra Jadeja could be a first choice. He’s been in fantastic form and has worked hard to improve his batting, making him even more dangerous in this format. He had a flawless year last year, taking 13 wickets and scoring 227 runs.

Because of his talent, Andre Russell gets a lot of support from the Kolkata team management. He can bowl at any point of the game and delivers a lot of firepower to the centre.

For Chennai, Adam Milne is expected to take the new cherry. He has formerly represented the Mumbai Indians and the Royal Challengers Bangalore. He has taken seven wickets in nine IPL matches, with the best figures of 2 for 21.

Varun Chakravarthy is an excellent run-keeper and one of the few net bowlers who have represented India at the top level. With 18 wickets in 17 matches, he was the best wicket-taker for the Knight Riders last season.

Sam Billings is a superb spin bowler, which is a plus for foreign wicketkeeper batters in the Indian subcontinent. He has 334 runs in 19 IPL innings, including three half-centuries.