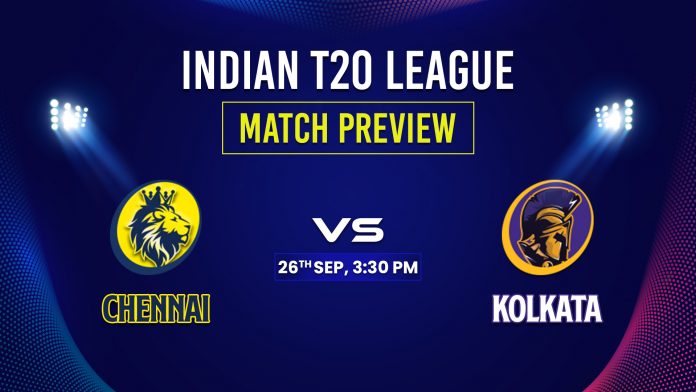 Chennai and Kolkata are ready to battle for their place in the playoffs, after both the teams defeated their opponents in their previous games. Chennai has already made it to the top of the table after winning their last game, chasing a target of 157 against Bangalore. Though Kolkata was not in a good spot, when they came to UAE, on the table, the team has made a fine comeback securing 4th spot on the table after defeating Mumbai in their previous match. If it really was a comeback or just a lucky win, is something we'll find out on Sunday, when the team plays against the masters of the game, Chennai.

The 38th match will take place in the Sheikh Zayed Stadium in Abu Dhabi. Kolkata's newly added batsman, Venkatesh Iyer, has proved to be an excellent add on to the team. Kolkata won against Bangalore at the same stadium and Venkatesh had a great role to play in that victory. With a strike rate of 164.91, he is a hard hitter and a great powerplay batsman. More than that Kolkata has Russell, he is the man all eyes will be on. Andre Russell is Kolkata's batsman who has the best strike rate against Chennai bowlers. He is a hard hitting giant, who can turn the tables in any match. If he plays well today, he can definitely make his team win against the top team.

Talking about Chennai's squad, Deepak Chahar is an amazing bowler, with best economy and great wicket taking skills. He has been in good form before and in UAE. Even in the Indian T20 League 2020, he shined in similar weather conditions. This year too, we have seen a dependable bowler in him and he is expected to take his team to a victory today too. Suresh Raina is another pillar of CSK, he supports the team with his strategic and classy batting, making high scores at 1 down. Suresh Raina is a game changing batsman, currently in form and doing well for his team.

The pitch of Sheikh Zayed Stadium is a slow one. The pitch favors batsmen more as it makes it hard for bowlers to use a variety of bowling techniques. The seamers and swing bowlers are at a disadvantage at the stadium. The only bowlers that the pitch supports is spinners. So, in the game, spinners and hard hitting batsmen will be the key to victory.