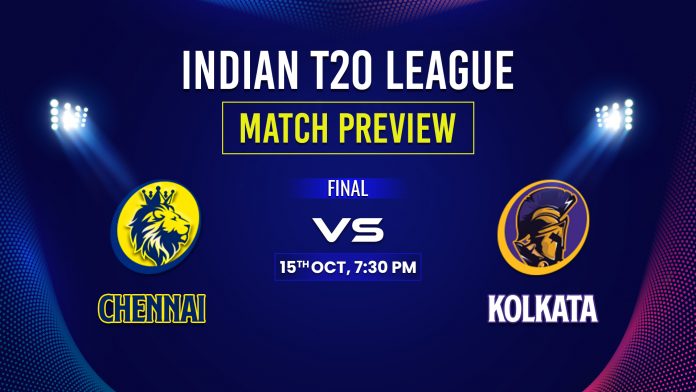 Kolkata and Chennai will be up against each other in the grand finale of the Indian T20 League scheduled on Friday, 15th of October. The three-time winner Chennai made it to the finals quite easily while the two-time champions had some troubles while getting into the finals. However, despite the hurdles they somehow managed to achieve that.

Kolkata was persistent throughout the league. Even though they had just a few wins in the first leg, they performed wonderfully during the second leg of the league. Especially Venkatesh, he has been in a tremendous form and is expected to be the same in the finals too. The team's playing style has evolved, almost all the players contribute something to the game and that acts as a factor for their winnings.

This would be an issue for Chennai, as the duo have managed to get consistent runs throughout the league. Breaking this partnership will be the top most priority of Chennai. The middle order of Kolkata is a bit sluggish, Morgan and Kartik did not perform with their bat in the match against Delhi, they won the match mostly because of the head start Gill and Iyer gave in the second innings.

Chennai has proved why they are one of the best franchises in the Indian T20 League. They emerged out victorious against Delhi when the match was nearly lost and Delhi had a full grip on the game. Therefore, you can never underestimate this team. Kolkata needs to give their best in the final as Chennai will pull out all their stops to get that fourth title.

The temperature will be around 33 degrees during the match. We might see a bit of clouds but it is not harmful for the match as no precipitation will take place. Humidity will be around 50 percent.

The pitch at Dubai is a batting friendly one and batters will get an advantage in this match. The pitch also has a good bounce, hence, helping the pacers slightly more than the spinners. The record of winning matches while batting first is very bad at this pitch so the team winning the toss will bowl first.