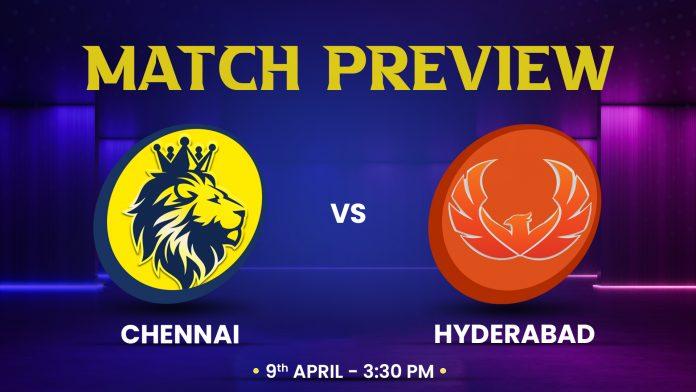 The clash between Chennai and Hyderabad has always turned out to be a nail-biting contest in the Indian T20 League. In the last ten matches between the two teams, Hyderabad have won eight times. However, this season, both Chennai and Hyderabad are struggling with their lineups. But, this time around, both the teams will look to change their fate in the League and eventually advance towards the Indian T20 League title.

Ravindra Jadeja is leading the team of Chennai for the first time in his career. However, the team has yet to register a win this season. Chennai have played three matches, and lost all of them. In their last match, Chennai was defeated by Punjab by a big margin of 54 runs. The off-key performances from Ruturaj Gaikwad, Moeen Ali and Ravindra Jadeja is a matter of concern for the fans of four-time title winners. The absence of Deepak Chahar has also left a big spot left to fill in the bowling division.

Luckily, the performance of Dwayne Bravo is up to the mark with the bowl. However, his flow with the bat is still questionable. The team has to come up with a perfect blend of 11 players.

Hyderabad is currently at the last spot on the points table. Skipper Kane Williamson scored just 16 runs in the last match. The top order of Hyderabad is struggling big time as the first four batters only managed to register just 96 runs in their first two matches. Wicket keeper-batsman Nicholas Pooran showed some shade of his hard-hitting batting in the last match. However, the team still needs to work on their opening lineup.

This Mumbai pitch is one of the best batting pitches across India. Dr. DY Patil Sports Academy offers assistance to the batting unit as the ball comes on to the bat pretty nicely. It is natural for the teams to select batting first as scoring 180+ runs is an achievable feat for the batters. However, given the trend of this year’s Indian T20 League, the captains tend to bowl first.

The weather in Mumbai on 9th April is expected to have a clear sky.

Dwayne Bravo is a right-arm fast all rounder. Recently, dethroned Lasith Malinga and became the highest wicket-taker of Indian T20 League. He has shown his mettle with the bowl so far this season. It is expected that Bravo will come through with his batting abilities in the upcoming match.

Wicket keeper-batsman Nicholas Pooran shown in the last match of Hyderabad. The Trinidadian native has put on some runs for his team with the bat this season. However, given his resume in the short format of Cricket, the fans expect more from him. Surely, Nicholas is a natural draw for the team of Hyderabad.

Suggested Playing XI No.1 for Chennai vs Hyderabad MyTeam11 Team:

Suggested Playing XI No.2 for Chennai vs Hyderabad MyTeam11 Team: