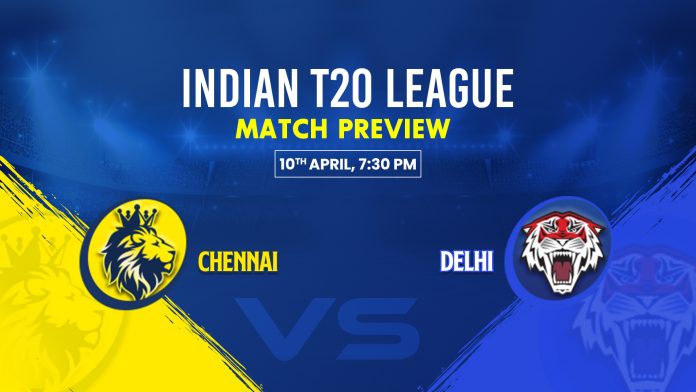 Runners-ups of the previous season, Delhi will face 3-times winner Chennai in the second match of Indian T20 League 2021. It will be interesting to see the battle between Dhoni and Pant.

Chennai and Delhi both will get their campaign underway when they face each other in the second encounter of the Indian T20 League 2021 at Wankhede Stadium. Delhi had a fabulous season last year with making maiden entry into the final. They are updating their game with each season. From finishing last in 2018, they cracked playoffs for two successive years. This season, they got some good players from the auction 2021. Delhi also appointed Rishabh Pant as the new skipper in the absense of Shreyas Iyer who has been ruled out due to injury. Delhi had some loopholes in their batting order but this year, they look settled. Shaw and Dhawan will bat in the opening slot despite trying Stoinis in last season’s playoffs. Shaw is going through good form and Dhawan was the leading run-getter of the last season for Delhi.

Rahane will take the role of Iyer and Pant will come at number four. Delhi have good options for middle-order as they have Billings, Smith and Hetmyer. Shimron Hetmyer will likely get the final nod. Ashwin and Aaxr Patel will be two spinners, followed by Nortje and Rabada leading the pace-attack. Either Umesh or Ishant will be the only Indian pacer. Delhi have a compact unit but captaincy will be in radar as Pant doesn’t have experience of captaining the side. How he handles the pressure or how he manages a team will be an interesting thing to see in Mumbai. Delhi have some experienced players in the playing XI and it will surely help Pant to crack the captaincy code.

Meanwhile, Chennai will start their campaign after a debacle in 2020, and Dhoni’s troops will look to come out stronger this season. Chennai also invested a good amount in the auction this year. Hazlewood opted himself out so Dhoni has to find a better option in pace-attack. Sam Curran may get the support of Indian pacers Thakur and Chahar. Dhoni will go ahead with new buy Moeen Ali and also look for Imran Tahir to make the spin combination better but on a surface like Mumbai, the combination might be tougher. Batting was not impressive last season and for now, Dhoni can go ahead with proper Indian top-order. Gaikwad and Uthappa may bat in the opening slot to send Plessis in middle-order. Raina is also back at number three and Rayudu will bat at number four. The choice of fourth overseas player will be pretty confusing and Dhoni may take a call on Bravo but his current form may change his mind. Gowtham was also picked in the auction who might be handy with the bat and ball.

Chennai has to fix their issues in batting and their success would matter how top-order perform this season. They are not in the race of playoffs considering their form and current squad but they have the best captain behind the stumps who can change the game with his skillful tactics. Delhi has the slight edge in Mumbai and their best bowling attack might hurt Chennai in the first game at Wankhede.

Wankhede’s track is good for batting and the dew factor in the second innings will allow batsmen to rule the game. We may expect a score around 180 and 200. Toss will play an important role and the chasing side will have an advantage.