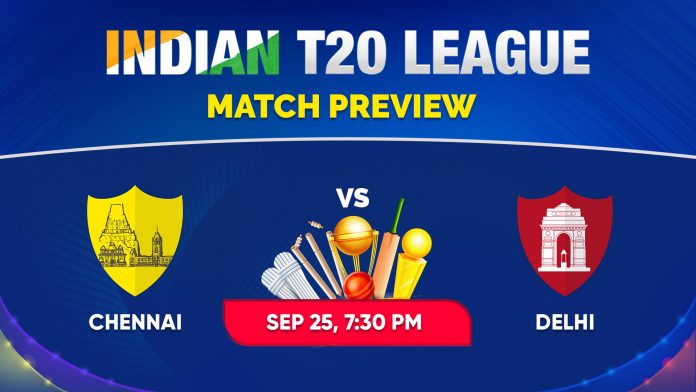 Chennai takes on Delhi at Dubai in the 7th encounter of Indian T20 League 2020.

Delhi is ready for their second assignment against Chennai after securing a thrilling victory in the super-over. Delhi requires the error check as their batting order went in trouble in the middle-overs before the Stoinis’ rescue came in last 3 overs. In the chase, it was the luck which helped Delhi to take the game in super over. Rabada delivered a fabulous over to seal the game for Delhi from the jaws of the defeat. Ponting would avoid any changes in the side despite some issues in the opening encounter. Ashwin is fully fit for the match so he will play against Chennai. Ishant will not be available for yet another match due to an injury.

Meanwhile, Chennai suffered a narrow defeat of 16 runs against Rajasthan in Sharjah after a high-scoring affair. On a hardcore batting track, Chennai’s bowling unit delivered a flop show and Ngidi’s last over made all the difference. Dhoni should have hit earlier and Vijay’s run-a-ball 21 were the slight errors in the chase. Chennai started the campaign with a 5-wickets victory over Mumbai but last game’s defeat put some questions in Dhoni’s mind. The ground is Dubai and Dhoni knows to deal with their bowlers on this challenging track. Rayudu is recovering from the injury and he might be unavailable for Thursday’s tie. Faf’s back to back half-centuries is a strong side but Chennai needs to focus more on their spin who have been pretty poor in first two games.

Dubai’s track is a decent T20 surface and it offers plenty of help to pacers. Batsmen will give good runs in both innings but the dew factor might play a role in the second half so chasing would be an ideal call. Spinners will get slight help from the pitch later the match progresses.