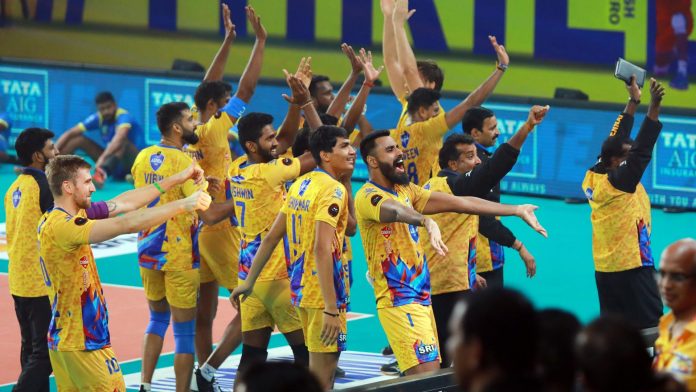 As the volleyball fever seems to take the thrills higher, the fierce battle to become the champions is getting intense. On Friday, the second semi-final of the RuPay Volleyball League witnessed an aggressive face-off! Ultimately, Chennai Spartans won with a leading five-set score of 16-14, 9-15, 10-15, 15-8, 15-13. Kochi Blue Spikers was wiped out by the Chennai franchise, and the former experienced a hard-hitting defeat.

The first set began with both the teams striving not to give a clear advantage to one another. Ruslans Sorokins from Chennai Spartans bagged the prestigious title ‘RuPay Player of the Match.’ He created the first opening, and the score was all square at 7-7. Kochi called for a Super Point after TTO and converted with a thunderous spike by Prabhagaran S. taking this first set to another level, Prabhagaran followed the course of action with another spike on their serve and Kochi acquired a 10-8 lead. In return, Chennai called for a Super Point to level the score at 11-11. This cut-throat completion continued, but Chennai won the first set with 16-14.

In the second round, the teams buckled up, and this nail-biting action sustained. When Kochi Blue Spikers called for a Super Point, the team went into TTO with an 8-5 lead. After relentless efforts by Chennai Spartans, which included a Super Point that failed miserably, Kochi managed to secure the winning set with a 15-9 score.

As the game stood at 1-1, both the teams pumped up to win the race. Where Chennai won the Super Point, Kochi team players namely, Lee and Joseph, led from the front in the set and scored 4 and 3 points respectively. Kochi regained the command over their leading position with 15-10.

As in the fourth round, the score stood in favor of Chennai Spartans with 15-8, the final fifth round was the decider. With a head-to-head fight between the two rivals, Chennai picked up the momentum as Sorokin came to the rescue with two spikes and one block to earn 8-4 lead at TTO. What brought back Kochi in the game was a praise-worthy spike by Lee, and as a result, the scoreboard turned the table on Kochi’s side with a 9-9 score. It was when Chennai called a Super Point that was successfully converted; the numbers stood at 15-13 and Chennai qualified for the final.

Chennai vanquished the opponent with a smashing performance, and now it’s time for the showdown. Chennai Spartans will now compete with Calicut Heroes in the final RuPay Pro Volleyball League. You can catch the live broadcast, exclusively on SONY TEN 3 and SONY SIX, or you can glue your eyes on the live match streaming on SONY LIV at 8:00 pm IST on 22nd February 2019.