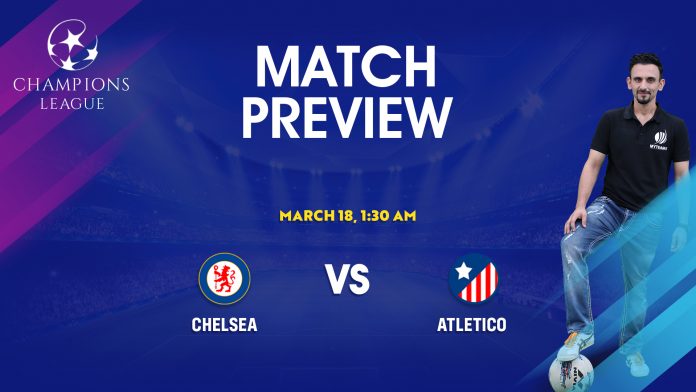 Atletico Madrid will make travel to the UK for the second leg round-of-16 clash with Chelsea in Champions League 2020-21. The English club has the advantage after 1-0 away success in the first leg game between two sides.

It was Oliver Giroud who delivered a much-needed 1-0 advantage over Atletico through his outstanding bicycle kick when Chelsea appeared in their first leg encounter in the round-of-16 tie of Champions League. Chelsea welcomes the La Liga club to Stamford Bridge on Wednesday evening.

The Blues already have scored an away goal and they would be happy to play their second leg game at home. Thomas Tuchel's men are in tremendous form and Chelsea are unbeaten under the new manager. Since taking the charge from Lampard, Tuchel remains undefeated in 12 games with eight wins and four draws across all competitions. Under Tuchel, Chelsea haven’t conceded a goal at Stamford Bridge. One record favours Chelsea as the Blues have never failed to win the two-legged game in European competition after winning the first-leg.

Both clubs are coming off a draw in their previous domestic top-flight encounters as Chelsea shared the spoils with Leeds while Atletico were held for a draw by Getafe. The Spanish club is also in terrific form and they are heading towards a top-flight title victory. Atletico maintained their top-spot, ahead of Barcelona and Real Madrid. Diego Simeone's side have lost the rhythm in last few weeks and allowed Real and Barca to reduce the margin in points-table. One or two bad games can spoil their preparation in the pursuit of the La Liga crown. Despite their dip in form, Atletico are four points ahead of Barcelona after 27 matches. Atletico have failed to progress past the quarterfinals since 2016 when they made into the final of this competition. In the last edition, they lost to the German club, Leipzig.

Mason Mount and Jorginho both picked up bookings in the first leg and they will not be available for the home clash. Hakim Ziyech is also one yellow card away from a ban but Tuchel cannot rest his key player. Tammy Abraham may also sit on the bench. Marcos Alonso and Callum Hudson-Odoi will play as the wingers after starting in the first-leg game.

Diego Simeone will stick to his main formation and Atletico has no major injury concerns. Joao Felix may get a recall to the starting lineup in place of Yannick Carrasco. Either Renan Lodi or Mario Hermoso will play at the left-hand side of the backline. The playing XI will be quite similar to the eleven which featured against Getafe.