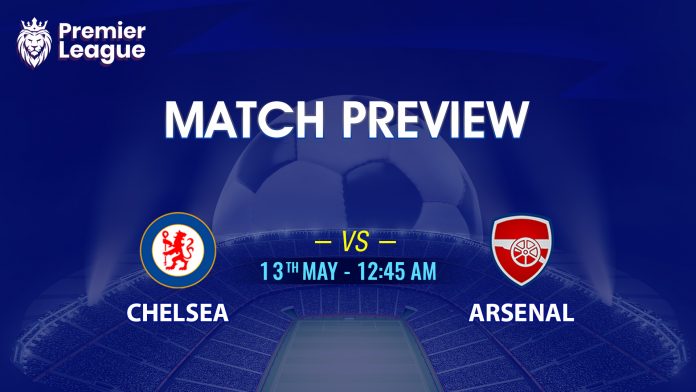 Arsenal will make travel to Stamford Bridge for a midweek clash against in-from Chelsea. Gunners edged past West Brom 3-1 last week while Chelsea defeated league-leaders City 2-1 after an injury-time strike.

Chelsea will host Gunners at Stamford Bridge to extend their winning run in Premier League. This month is going to be a special one for Blues as they will appear in two finals – FA Cup and Champions League. Since the departure of Lampard, Chelsea has been transformed by Tuchel and they will now fight for two silverware in 2020-21. Their top-four finish is almost assured as they are now 6 points ahead of West Ham and one point ahead of 4th placed Leicester. Both sides lost their previous matches so it also helped out Chelsea to strengthen its position on third spot.

Sergio Aguero missed out the penalty for City and it made a big difference in the game. Sterling’s opener was canceled out by Ziyech’s 63rd-minute strike. Alonso’s injury-time spoiled Man City’s title party and Chelsea claimed vital three points. Blues are unbeaten in their last eight home top-flight matches against Arsenal and their last defeat against Gunners at Stamford Bridge came in October 2011. Tuchel’s men have won more points in Londo Derby games this season than any other side. They lost only one game out of 9 and 7 victories came during this run.

Meanwhile, Arsenal would look to make the league double over Chelsea. The only defeat for Blues in London Derby fixtures this season came against Gunners. Arsenal overcame Blues 3-1 on Boxing Day fixture this season and their last league double over Blues came in 2003-04 when they won the title. Gunners are coming off a clinical 3-1 home win against West Brom, courtesy of Rowe, Pepe, and Willian’s strikes. Arsenal couldn’t replicate last season’s performance in 2020-21. They failed to crack the final in domestic cups and suffered unwanted defeat in the Europa League semifinal against Villarreal. After losing the first leg game 2-1, Arsenal played a goalless draw.

Gunners are currently occupying the ninth spot in Premier League standings and finishing in Europa League position looks slightly tough here. Liverpools’ victory last week made it difficult. Gunners are 6 points behind to 5th placed Hammers and 5 points clear of the Reds. Arsenal never lost a PL match against Chelsea in a midweek tie and their four such visits to Stamford Bridge ended in a draw. They have also beaten Blues in the last two meetings in all competition but things are slightly tougher because they beat Lampard’s side and Chelsea are a different side under Thomas Tuchel.