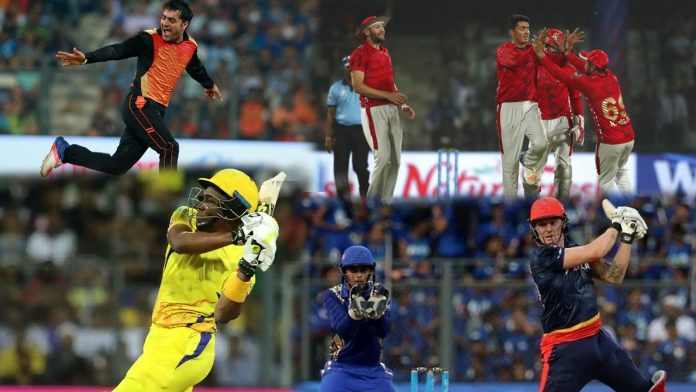 The 11th season of IPL had been a tale of unexpected events, last ball victories, and thrilling innings. Two of the major teams of the series made their way back to the field after a gap of 2 years which made the IPL 2018 season much more exciting for the fans. Well, with champions walking back to the battleground, the championship was expected to get a lot tougher. We were anxious to know which teams recorded a high-class, unexpected victory and here we are with the Top 5 battles of the IPL 2018 season. Have a look;

Game Changing Moment: DJ Bravo’s impeccable entry amid a critical situation for CSK with a whopping score of 68 runs off 30 balls.

The Game: The first IPL match of the 11th season, Wankhede stadium alluring with joy, CSK fans cheering with full power offering a warm welcome to the Kings walking back to the field after two years. Chennai won the toss and opted to bat which at first seemed to be a wrong decision as Mumbai Indians ended their innings with a total of 165 runs off four wickets. The rapid fall of wickets made it look like the game had fallen into MI’s part. CSK fans were highly disappointed with a score of 84 runs off six wickets, deteriorating the winning chances of CSK. It was the entry of DJ bravo that made chasing a total of 166 runs possible. Three 4s and seven 6s turned the game entirely in favor of CSK with the team winning by one wicket.

Game Changing Moment: A smashing score of 91 off 53 balls by Jason Roy turned the game upside down for Mumbai Indians.

The Game: The match was a trail of ups and downs moving through unexpected turns leveling up the challenging championship. Chasing a target is much easier than setting up a target, and that is what Delhi did after winning the toss. Delhi opted to bowl first, and the first innings ended with a total of 194 runs off seven wickets. Delhi was left with a tough target to achieve, but the players were determined to get the victory registered under their name. Jason Roy, who debuted for Delhi’s side in the 9th match of IPL 2018 gave an impeccable performance scoring a magnificent 91 off 53 balls and remains unbeaten. Players like Pant and Roy turned the game upside down helping Delhi to achieve a ‘hard to attain’ target and becoming victorious.

The Game: Chennai vs Punjab, an illuminating battle with two thunderstorms, MS Dhoni and Chris Gayle standing head-to-head, all set to take the game up another level of excitement. The game kick-started with CSK winning the toss and opting to bowl. KXIP being the first to bat, gave an incredible performance, setting up a target of 198 runs. Chris Gayle was the star of Punjab’s innings, scoring 63 runs off 33 balls hitting seven 4s and four 6s in his debut match for Punjab. Everyone believed CSK to chase the target and announce themselves as the winners of the night, but destiny had other plans. Chennai seemed to lose the game with a rapid fall of wickets, and that was when the captain cool took over. Despite a back injury, he scored a brilliant 79 off 44, the highest score of his T20 career. However, nothing could work, and CSK lost the game to Punjab just by four runs.

The Game: The game was a thunderous battle between DD and KXIP with the hosts opted to bowl first after winning the toss. The first innings went by with slow and steady progress from Punjab’s end, scoring a total of 143 runs with a loss of eight wickets. DD players, Ankit Rajpoot, Andrew Tye and Mujeeb Ur Rahman, were the game changers in the first innings conceding 23, 25 & 25 runs respectively and taking two wickets each. Delhi daredevils thought 144 to be a readily achievable target, but that was not the case. Despite a significant bowling performance, DD had to wrap up their innings at 139 off eight wickets.

The Game: An enthralling and exciting battle which seemed to be a close call for Mumbai until destiny played its part. The game began with MI winning the toss and opting to bowl to take advantage of their chasing power. The players of Sunrisers Hyderabad couldn’t stand in-front of MI bowlers and gave up at 118 runs. The target seemed to be a cakewalk for MI as they were great chasers but SRH bowlers were avenging with the feeling of revenge. Rashid Khan, Kaul and Thampi changed the entire game in just 9.5 overs. Rashid delivered four overs taking two wickets by conceding 11 runs, Kaul took three wickets by conceding 23 runs in their 4 overs. But Thampi who bowled only 1.5 overs took two wickets by just conceding four runs. The rapid fall of wickets made MI wrap up their innings at a total of 87 runs with SRH crowning themselves as the champions of the night.

We believe that these were the top 5 team battles of the IPL 2018 season, what do you think how close or accurate we were in our analysis? Which teams had you expected on the list? Tell us all you think we would love to hear from you.

Share
Facebook
Twitter
Previous articleIPL 2019: Top Franchises & their team of players to WIN the Title
Next articleIND vs AUS: Team Blue Falls Shy of 4 Runs to Record a Triumph over Aussies