Can Yuzvendra Chahal and Kuldeep Yadav make a comeback in T20s? 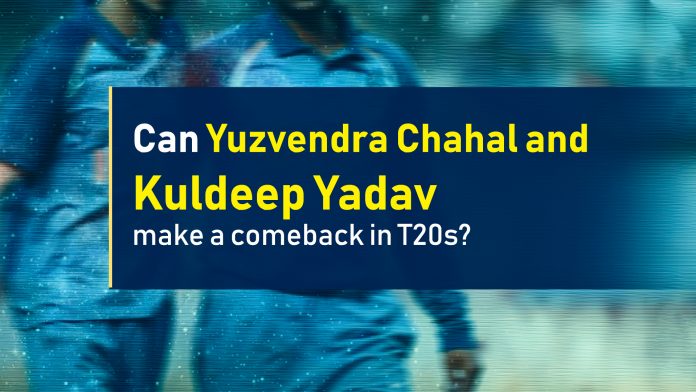 Once known for creating havoc on the field, a nightmare for even the best batsmen, Kuldeep Yadav, and Yuzvendra Chahal are struggling to make a place for themselves on the field in the present times. From being the face of India Cricket Team’s bowling line-up to waiting to get a chance in the playing XI of the team, the fame & potential of the player looks fading.

Chahal, who was once picked important wickets for the team is now just given a chance in the ODIs wherein he’s not included in the XI most of the times. Kuldeep Yadav, India’s chinaman, known for making opponents go weak in the knees, is having his share of hard times. With the likes of Rahul Chahar, Krunal Pandya, and Washington Sundar making a mark, the players are expected to be replaced soon.

The Indian pitch is known to support spinners. The left-arm chinaman Kuldeep Yadav and right-arm leftbreak Yuzvendra Chahal, are known to for acting as the supporters of India’s bowling line-up. Being well-versed with the home-conditions, both Chahal and Yadav know how to pull wickets & make the opponents go weak. The upcoming series is scheduled to be held in India that can surely help the players to make a comeback in the T20Is.

The World Cup tour has been quite good for both Chahal and Yadav. Picking 12 wickets in 8 games at an economy rate of 5.97, Yuzvendra Chahal was one of the leading wicket-pickers for the Men in Blue during the tournament. On the other hand, Kuldeep Yadav’s season was average with six wickets in 7 matches, picked at an economy rate of 5.03. The World Cup campaign has boosted the confidence of the players that might help them make a remarkable comeback into the shortest format of the game. Thus, we can expect the players to once again sprinkle their magic on the field in the coming times.

Also Read: "I Am Pretty Good At Taking Responsibilities," Says Deepak Chahar Ahead Of T20 Series

Kuldeep Yadav and Yuzvendra Chahal both had an awful series when India went to West Indies for a 3 T20Is, 3 ODIs, and 2 Tests series. Neither of the players was given a chance int eh shortest format of the game and ODIs where they were called in the squad have been very awful for both the players. During their entire ODI journey int eh recently concluded series, Yadav managed to pick three wickets in 2 matches, whereas Chahal could scalp only 1 in the only match he participated. The series ended up putting a question mark at the potential of the players and thus, creating doubt over their consistency and form for Blue Army’s upcoming series against South Africa.

Their Style Is Getting Too Predictable

The players are constantly facing failures when it comes to picking up wickets. Since quite some time, the batsmen have been able to stand strong against the players as their bowling style is becoming way too predictable. Learning to tackle the players, batmen are registering an easy victory against them. The reason is, Yuzvendra Chahal is not learning from his past mistakes and the X-factor that made Yadav different from others is nowhere to be seen now. These things are affecting the importance of these players in the team.

With equal percentages of goods and bad, the players’ inclusion in the upcoming T20 series of the team becomes quite doubtful. The potential is there, but they have failed to showcase it at times. With their bowling style becoming more monotonous than impressive, their T20Is career looks in doubt. What do you think will be the T20 future of these players, will they be able to make a comeback? Do let us know in the comment section below.