Can Rishabh Pant retain his place in T20Is till World Cup? 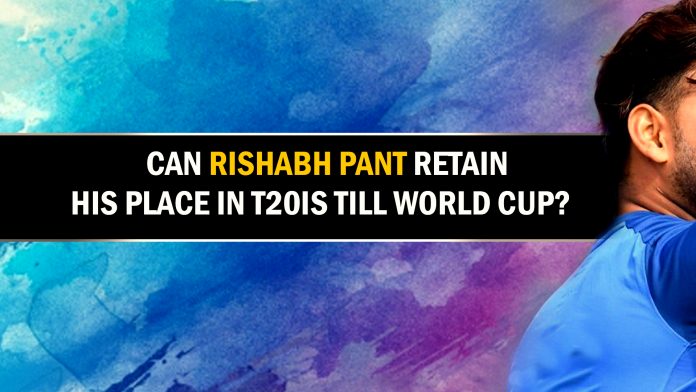 Seldom we an individual blend dedication and grit while epitomizing the facet named perfection in most beautiful way possible. Whenever we see the Indian Cricket team step onto the ground, it seems that the national crest is imbibed on their chest in the most beautiful way possible. Even the greatest of statistician will find it difficult to record the times men-in-blue have given their heart out. With this, the selection in the 15-member squad becomes vital for the Board of Control for Cricket in India (BCCI) selectors.

Recently, India’s former skipper Mahendra Singh Dhoni has been on sidelines having been investing his time on national duty and other important commitments. In the transition process, the selectors invested their money on Rishabh Pant who has been first wicket-keeper choice in Test cricket. However, time and again, the young sensation hasn’t been able to impress populous with his limited-overs performances.

The loose shots coupled with fewer responsibilities has always made his case look weak. And even though he was called as Shikhar Dhawan’s replacement in the recently concluded World Cup 2019, Pant failed to provide the stability in the middle. His sad run continued against minnows West Indies.

With Dhoni’s absence from South Africa series – the series brings Pant yet another opportunity to express himself at the supreme level. However, with the likes of Ishan Kishan, KL Rahul, Sanju Samson doing well in the shortest format, the selectors may get tempted to try new faces if he fails to take responsibility in games to come.

The next year’s World Cup, which is scheduled in Australia will have larger grounds and mistimed or rash shots will go straight to the fielder. This remains to be seen if he can adapt to the hour requirement. Pant is known to gulp pressure in crunch situation as seen in Indian Premier League – however, the question still remains the same, can he replicate IPL effort at International level. Well, only time will tell.