Can Mbappe be next Ronaldo? 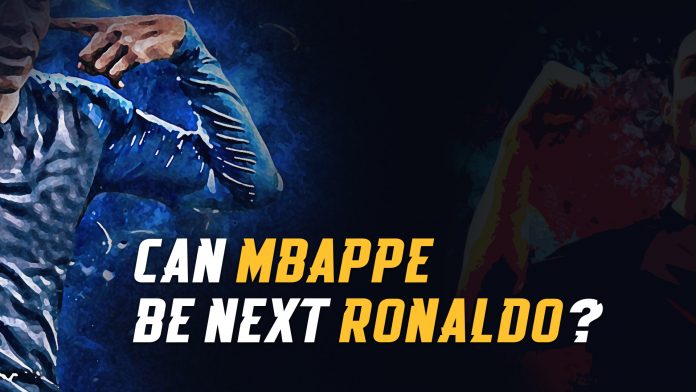 There is no denying that Kylian Mbappe has achieved so much in such a short span of time that some players can only dream of. At the age of 20, Mbappe is already considered as one of the best players in the history of football and is already being compared to the likes of Lionel Messi and Cristiano Ronaldo.

Mbappe poses same threat that young Cristiano used to do in his initial days. With the players like Cavani and Neymar in PSG, Mbappe is still considered as the most valuable player for Ligue 1 Giants. Thus far Mbappe has played 101 matches for PSG and has scored 72 goals.

Having scored 50 French league goals, he has smashed the previous records of Yannick Stopyta (21 years) and Djibril Cisse (22 years). At his age, Lionel Messi had scored 26 goals for Barcalona whilst Cristiano Ronaldo had 19, having moved from Sporting CP to Manchester United. And the biggest achievement of all was the World Cup in 2018 which both Messi and Ronaldo has failed to achieve.

Mbappe scored a wonder goal with a 25-yard strike against Croatia in the 2018 World Cup Final, with France winning 4–2 and with four goals in the tournament he received the FIFA World Cup Best Young Player Award. So can we say that Mbappe will be the next Ronaldo or will even surpass his legacy? I still think there is a long way to go.

There is no denying that Mbappe has the same skills and passion as Ronaldo, but the important thing we need to know is that Ronaldo has achieved so much in European and Premier Leagues which are considered to be the toughest leagues across the globe.

He has scored against some quality opponents while Mbappe is playing in Ligue1, which is considered relatively easier compared to other leagues. French League is also called feeder league with its best players leaving to play in “better” leagues. To be the next Ronaldo , Mbappe has to prove his metal against the best teams and against the big players and for that he needs to join either the Spanish League or the Premier League.Till then lets slow down the comparision and relish the performance of this wonder kid.