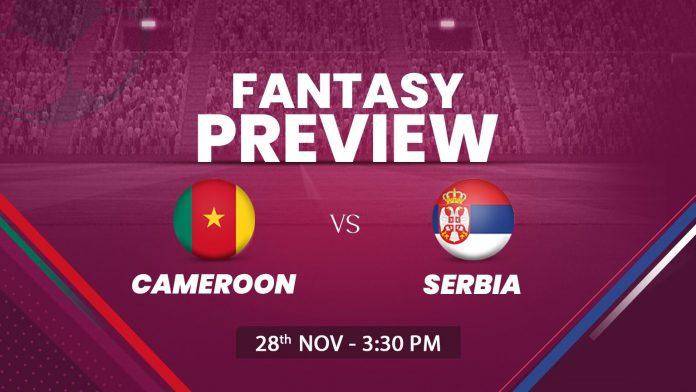 On Match Day 2 in Group G, Cameroon will face Serbia at the Al Janoub Stadium. Cameroon have failed to register a win in their last 5 matches whereas Serbia has won 3, drawn 1 and lost 1 out of the last 5 games. A win is necessary for both the teams to keep their World Cup hopes alive. Let’s look at the fantasy team prediction for the match and do read till the end if you want to see suggested fantasy XIs.

Cameroon began their World Cup campaign with a 1-0 loss against Switzerland. Despite the loss, Cameroon looked dangerous in attack against the Swiss with the attacking trio of skipper Choupo-Moting, Brentford striker Mbuemo and Lyon winger Toko-Ekambi. The Les Lions also boast of a strong midfield with the likes of Zambo-Anguissa and former Barcelona midfielder M. Hongla. Cameroon face no injury concern and manager R. Song is expected to name an unchanged starting XI.

The Serbs had a disappointing start to their campaign against Brazil after a stunning 2nd-half brace from Richarlison. The Eagles now face the prospect of being eliminated from the tournament against Cameroon, if they lose on Monday. Serbia have plenty of attacking options in A. Mitrovic, D. Vlahovic, L. Jovic and F. Kostic but defence is a major concern for coach D. Stojkovic. Striker D. Vlahovic can start up front with Mitrovic against Cameroon and midfielder N. Gudelj can be dropped to the bench.

Al Janoub Stadium will host the second Group G fixture between Cameroon and Serbia on Match Day 2. The 44,000 seater stadium is the home ground of Qatari club Al-Wakrah SC. The match will start at 3:30 PM IST on 28th November and lineups will be available at 2:30 PM IST on MyTeam11 fantasy app.

B. Mbuemo (Cameroon): The Brentford striker is one of the best second strikers in the game. His off-ball work was at full display against Switzerland and more of the same can be expected against Serbia as well. The 23 year-old striker has 3 goals and 1 assist in all competitions this season for club and country.

A. Mitrovic (Serbia): Championship’s top scorer last season has carried on his brilliant form in the new season and scored 9 league goals before the World Cup. The powerful Serb will be a menace for the Cameroon defence for the entirety of 90 minutes on Monday and can be lethal on set-pieces and one-on-one duels.