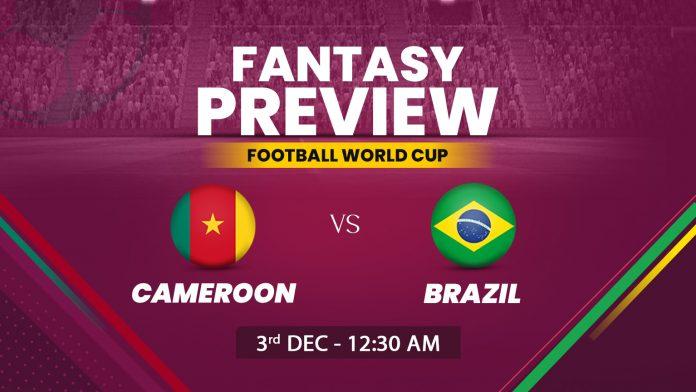 With the sword of elimination hovering over the heads of Cameroon’s players, R. Song and his team would look to dominate the former World Champions. The group-stage battle of Cameroon vs Brazil will take place at the Lusail Iconic Stadium at 12:30 AM IST on 3rd December. Read till the end to find out the fantasy team prediction for the match and fantasy XIs for the match.

The Indomitable Lions are facing the tough task of beating mighty Brazil in the upcoming match. To stay in the Football World Cup 2022, they have to beat Brazil and hope for either a draw or for Serbia to beat Switzerland by a one-goal margin in the other game in Group G. In previous matches, The Indomitable Lions did create many chances but were unable to convert them to goals.

Brazil has already booked a spot for themselves in the Round of 16. Selecao has performed brilliantly so far in the Football World Cup. Winning their first two games of the tournament, the Brazilian side is yet to concede a goal this tournament. The last time when these two met was in the 2014 Football World Cup. The match was then won by Brazil, all thanks to Neymar.

Choupo-Moting (Cameroon): The skipper of the Cameroon side has a lot on his plate in the upcoming match. With the prospect of winning against Brazil, the Cameroon defender might pull one of the biggest upsets in the history of the Football World Cup.

Neymar Jr (Brazil): Neymar is undoubtedly one of the most decorated strikers in today’s generation. The Brazilian striker has done it all for his country in the recent past. His most memorable goal was the one that earned Brazil a Gold Medal during the Rio Olympics.