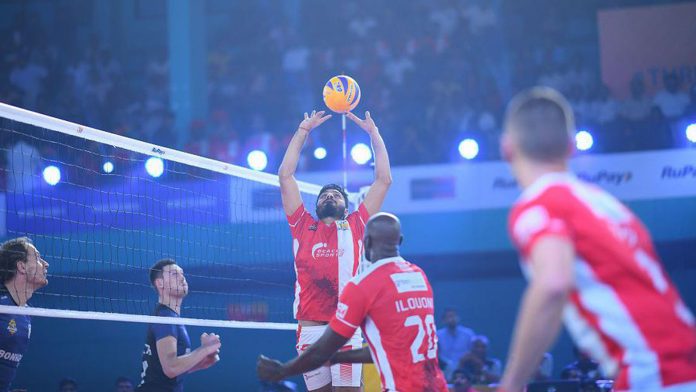 It was an interesting start to the match as Ahmedabad nosed ahead with a 5-3 lead owing to two errors from Calicut and three points scored by Novica Bjelica and Victor Sysoev. But Calicut showed why they were table-toppers pulling back things together and taking the lead at 8-6 at the first Technical Time Out (TTO). At 12-10, Calicut looked on their way to win the set but Ahmedabad called for a Super Point and converted on Calicut’s serve to level the equation. The last few points were hard fought and it looked like anyone’s set till 14-14. It was finally a spike by Paul Lotman which won the set for Calicut 15-14.

In the second set, Ahmedabad yet again went into an early lead but as it was the case in the previous set Calicut came back to level it 5-5. Ahmedabad was determined not to fall behind and went into the TTO an 8-6 lead. Calicut called for a Super Point at 6-9 and converted to close the gap to 8-9. Ahmedabad extended the lead even further as they went to 13-10. At 14-10, Ahmedabad had their first set point but could only seal the deal at 15-11 when Vipul Kumar’s spike went out. The match was now level at 1-1.

Winning the second set seemed to have given Ahmedabad the momentum as they led 5-2 displaying good attack and defence. Calicut was in no mood to let Ahmedabad run away with the lead and levelled the score at 7-7. Ahmedabad somehow entered the TTO with a point advantage. After the TTO it was a neck-to-neck battle as no team was able to widen the gap. Ahmedabad called for a Super Point at 10-11 but failed to convert as Lotman’s spike was too hot to handle. Calicut won the set as Ajith Lal closed it 15-11 with an inch perfect spike. Calicut led 2-1 in the match.

As the fan support increased, Calicut raised their game taking an 8-1 lead with Lotman acing a Super Serve at 6-1. Ahmedabad seemed to have lost their way. The conversion of a Super Point by GR Vaishnav also seemed futile as the gap of points was too much to handle. Calicut won the set 15-9 that ensured an unbeaten end to the league stage for Calicut.

Chennai Spartans will take on U Mumba Volley on February 16th 2019 in the second leg of league in Chennai. It will be broadcast Live and Exclusive on SONY SIX and SONY TEN 3 and will be streamed live on SONY LIV from 6:50 PM IST.

RuPay player of the match: Paul Lotman of Calicut Heroes