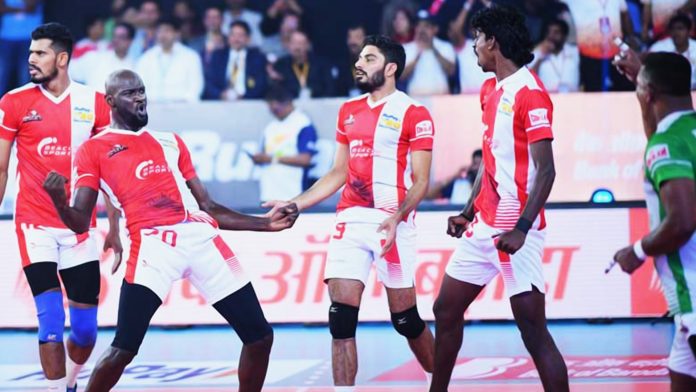 Ajith Lal became the first player to score half century of spike points with 53 to his name.

After initial exchanges, it looked like Calicut will run away with the set as they went into a 4-2 lead but Hyderabad soon levelled the scores with a block and a spike by Guramritpal Singh and skipper Carson Clark. Ajith Lal joined the party and helped Calicut take a lead of 8-5 entering the first Technical Time Out (TTO) with two spikes and a Super Serve. Post TTO, Hyderabad scored three consecutive points to level the score at 8-8 and with a spike from Raison Rebello went ahead for the first time in the set. The lead didn’t last long as Calicut called for a Super Point at 10-10 and converted it on Hyderabad’s serve. Hyderabad called for a Super Point at 11-13 but failed to take advantage and Calicut won the first set 15-11.

Calicut looked like running away with the second set as they led 6-3 when Hyderabad suddenly found back their rhythm and scored three continuous points with two blocks and a spike to level the score at 6-6. It was again Lal who gave Calicut two continuous points with a serve and a spike to give them the lead at TTO. Calicut called for a Super Point at 10-8 and converted on Hyderabad’s serve and soon after it was Hyderabad who did the same on Calicut’s serve as the score stood at 12-10 in favour of Calicut. Calicut was in no mood to fool around as they closed the second set by 15-11 leading 2-0 in the match.

After trailing 0-2 in the match, this set was do or die for Hyderabad as they fought for each point till 7-7 when a spike by Paul Lotman gave Calicut the lead entering the TTO at 8-7. After TTO, it was all Calicut as they closed the set 15-7 where Naveen Kumar contributed to the three points out of the last five with one serve and a super serve point. Calicut now led 3-0 in the match.

After securing the match in the third set, the Heroes went on a demolition job in the next set and climbed up to a 7-point lead before the TTO was taken. Post the timeout though, Hyderabad looked a different unit altogether and helped by two successful super points and a super serve by Rohit Kumar, turned the tables on Calicut to script a remarkable comeback to clinch the fourth set.

Calicut started the final set in fine fashion with a Super Serve from Naveen Kumar. However, Hyderabad put up another inspired effort in the final minutes of the game as Calicut tried to give their bench strength some time off the court, keeping Vinith and Lotman on the bench. Despite some late resistance led by Karthik, Hyderabad managed to prevail 15-11 after Calicut lost their Super Point when Ajith misdirected a spike. The match ended 3-2 in favour of Calicut.

Kochi Blue Spikers will take on Chennai Spartans on February 11th 2019. It will be broadcast Live and Exclusive on SONY SIX and SONY TEN 3 and will be streamed live on SONY LIV from 6:50 PM IST.