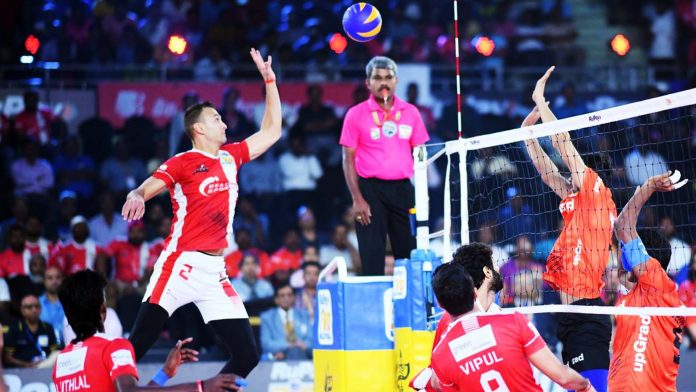 ~ Will play the winner of Kochi Blue Spikers Vs Chennai Spartans ~

Chennai, February 19th 2019: First semi-final of the RuPay Pro Volleyball League saw Calicut Heroes defeating U Mumba Volley in straight sets 3-0 (15-12,15-9,16-14) and become the first team to reach the final. Skipper Jerome Vinith led the scoring for Calicut with 12 points (10 spikes and 2 serves) whereas Vinit Kumar was the leading scorer for U Mumba with 7 points (4 spikes and 3 blocks).

The first set started with Calicut taking the early advantage with a 4-2 lead. Both teams were not allowing each other to gain a major advantage, but service errors by U Mumba hurt them. Calicut entered the first Technical Time Out (TTO) with a two-point advantage at 8-6. U Mumba called for a Super Point at 6-9 and successfully converted the same with a Pankaj Sharma spike taking U Mumba within a point’s distance. They soon levelled the score at 10-10, Calicut now called for a Super Point and converted as Sharma misdirected his spike. The score stood at 12-10 in Calicut’s favour. Calicut finally came out victorious in the set by 15-12 as Vinit Kumar’s second service error handed them the set.

It was a neck-to-neck fight in the second set as both teams countered each other well. At 4-4, Calicut picked up their game and for the first time in the set a clear difference of points of visible when skipper Vinith’s spike established an 8-6 lead at TTO. Vinith was in devastating form as he was spiking everything through the U Mumba defence. Calicut was looking unstoppable as they won the second set 15-9 to lead 2-0 in the match.

U Mumba had a strong start to the third as they led 6-4 owing to three unforced errors by Calicut. The newly introduced review system came to U Mumba’s aid on the 5th point for Calicut. A successful review helped U Mumba establish a 7-4 lead. U Mumba entered the TTO leading 8-5. They continued in the same way and established a 12-7 lead. Calicut called for a Super Point and converted to reduce the deficit to 3 and followed it up with a Super Serve by skipper Vinith. U Mumba now only had a point advantage. Calicut showed why they were unbeaten through the tournament as they levelled the score at 12-12 from 7-12 down. Calicut won the set 16-14 as Karthik A served brilliantly for the 15th point and a Kumar error awarded the match to them by 3-0.

Kochi Blue Spikers will play against Chennai Spartans on February 20th. The match will be broadcast Live and Exclusive on SONY SIX and SONY TEN 3 and will be streamed live on SONY LIV from 6:50 PM IST.

RuPay player of the match: Jerome Vinith from Calicut Heroes