But Why Only Pink Ball for Day/Night Tests? Know Here 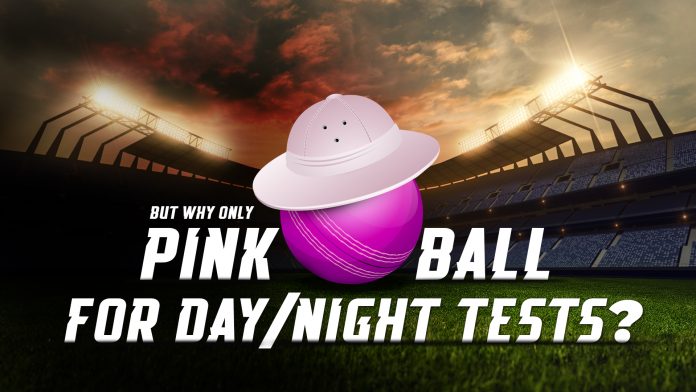 A lot of hype has been created in the market with the Pink Ball test approaching nearer. Both India and Bangladesh will be playing their first-ever day/night match at the Eden Gardens, Kolkata. Tests, a cricket format that is also known as red-ball cricket just because of the fact that a red-coloured ball used for the longest-format of the game, is about to witness the biggest change with the introduction of the pink ball.

But when the authorities thought about introducing day/night Test matches in front of the wide cricket fans fraternity, why did they opt for a pink ball instead of going with the traditional red ball? And even if they wanted to change the colour of the ball why did they not go with the white ball which is used for the shorter formats of the game? We believe these questions might have come to your mind too. Well, here’re the answers to all your questions.

Better Visibility under the Floodlights

The primary reason behind picking pink as the colour of the ball for day/night matches is its resemblance to the traditional red ball and better visibility under floodlights. Initially, when the authorities thought about introducing day/night test matches they experimented with various colours including orange. However, as per the words of the players, soon after coming off the bat, the orange ball posed difficulties for the fielders as it looked like a moving comet to them.

On the other hand, the conventional red ball is quite dark in color, which makes it a tough task for the players to locate the ball under the floodlights after the sunset. The white too didn’t look like a feasible option as teams in Test matches wear white jerseys which would have made finding the ball quite a task in itself.

Thus, they zeroed down to the pink ball as it shined bright under the floodlights making is a cakewalk for the players to find the ball. Also, the cameraman broadcasting the game live shall find it easy to capture the motion of the game, offering uninterrupted streaming to the users.

To Save Dying Test Cricket

With ODIs, T20Is and tournaments like IPL making their way into the lives of cricket fans, the legacy of Test cricket looks dying. People are way too occupied in their personal and professional lives that watching a 5-day game becomes a sort of distress. With the introduction of Pink ball in Test cricket, the authorities were able to shift the game into the latter part of the day, when people can spare time from the hustle-bustle of their lives. This way the authorities are trying to influence a positive fan following to the game & liven up the spirit of the format.

Why not while ball for day/night cricket?

There are quite a few reasons why the decision-makers of the game didn’t want to go with a white ball as a replacement for the conventional red ball. The primary reason as mentioned by the governing bodies is that they didn’t want the ball to be similar to the background wherein by background they meant the players. Both the teams playing in the Test match wear white dresses as per the guidelines of the game, thus, opting for a white ball would have had just added to the trouble.

Also, the endurance of the white ball was a major factor for not considering it as a feasible option. In a test match, a ball can be used up to 80 overs by a team, and it is well-known that the white ball cannot withstand such a long duration. Thus, it wasn’t preferred.

Well, with the introduction of something new, a lot of challenges are always on the way. Let’s see who will have the most of the pink ball. Will it be the batsmen who’ll enjoy scoring runs or will it be the bowlers who taste the delight of picking wickets? What do you think?