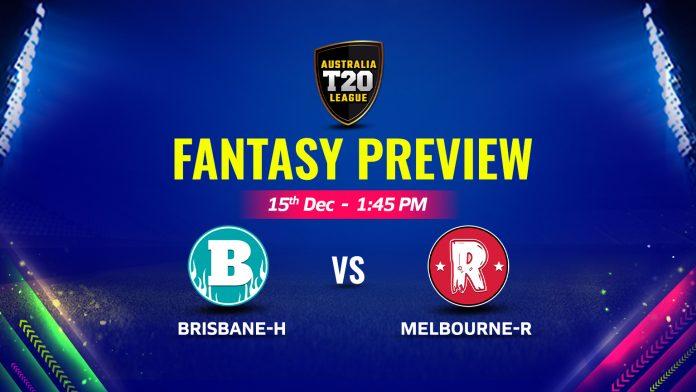 The rivalry between Brisbane-H vs Melbourne-R in the Australia T20 League will continue, with the upcoming match set to be played at the Cazaly’s Stadium Stadium on December 15th. The first match between these two teams will surely be an interesting one. Brisbane-H will be looking to redeem themselves after a mediocre performance in the last season. Meanwhile, the Melbourne-R will be aiming to maintain their form and take a commanding lead in the first match.

The team has historically struggled in the Australia T20 League, having won the championship only once in 2012-13. Last season, they managed to win only three out of 14 games. However, the team has added some star power to its roster this year, with the signings of S. Billings, U. Khawaja, M. Labuschagne, C. Munro and M. Renshaw.

While Khawaja and Labuschagne will be unavailable for much of the tournament due to international commitments, Munro is expected to step up and fill the void left by C. Lynn with his powerful hitting and vast experience.

Melbourne-R has struggled in recent seasons, finishing at the bottom of the league in the last two years. They have a strong bowling line-up, but their batting is somewhat lacking. Skipper A. Finch has been out of form and will need to step up to lead the team.

Veterans S. Marsh and M. Guptill provide some stability to the batting order. The injury to star batter L. Livingstone is a significant setback, but the Renegades will be boosted by the addition of West Indian all-rounder A. Russell, who will replace Livingstone for the first four matches.

Cazaly’s Stadium, formerly known as the Bundaberg Rum Stadium, features the main stand with seating on the Western side, as well as standing room around the rest of the ground. The grandstand was actually relocated from The Gabba when the latter was redeveloped in 1995.

It is difficult to predict the exact condition of the pitch at the Cazaly’s Stadium, as no domestic games have been played there recently. However, the pitch is expected to be relatively fresh, which should benefit the batters.

Spin bowlers may also have an impact during the middle overs. A thunderstorm is forecasted in Cairns on the matchday, but it is expected that the game will be able to proceed as planned.

S. Billings (Brisbane-H): S. Billings’ performance in the Australia T20 League has been exceptional throughout its history. His ability to smash the ball out of the park, makes him a player to watch out for in the upcoming match.

A. Finch (Melbourne-R): The skipper of the Renegades has been quiet with his bat. In the World T20 Cup, Finch played mediocre innings and lacked his former flair. However, he is now set to bounce back in the upcoming match.

Hope the team preview was useful for you. It’s now time to join exciting cricket action on MyTeam11. Make fantasy teams in Brisbane-H vs Melbourne-R and you might win big cash prizes. MyTeam11 is now also available on the Play Store! So, stop waiting and START PLAYING!