Ben Stokes: Jack of all, Master of ‘all’ 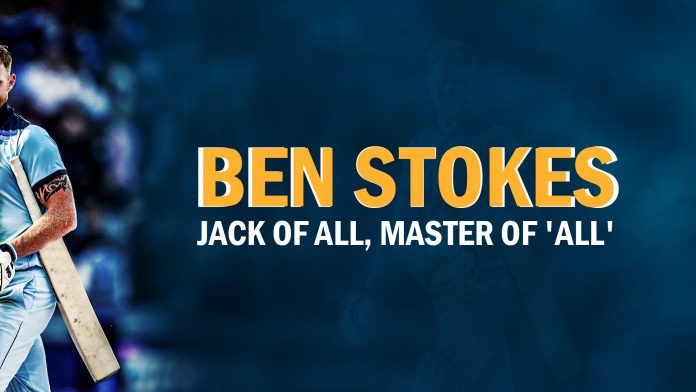 When both New Zealand and England were taking a dig at each other to lift their maiden World Cup Trophy, and the Kiwis were up to everything that they could do to keep England under pressure, there was a man who was hitting bowlers for boundaries every couple of overs. The man who helped the team stay in the game, during the inning and super over. Yes, you guessed it right, we are talking about none other than Ben Stokes.

Not just the World Cup, the player made headlines with his impressive performance during the Ashes 2019. Today, we at MyTeam11 take a moment to salute the World Cup and Ashes 2019 hero of England. Here’re a few reasons that will tell you why Ben Stokes is the Jack of All, Master of All. Read on to know more.

Scoring 465 runs in 10 matches with the Strike rate of 93.19, Stokes became one of the most successful batsmen for the Englishmen during their World Cup campaign. The last match when England was gearing up to lift their maiden world cup trophy, luck didn’t look to be in England’s favor as they kept losing wickets. But it was Stokes who helped his team stay in the game with his terrific knock of unbeaten 84, guiding England to drawing the game to a super-over & then one of the most interesting victories ever recorded in the history of cricket.

Well, he didn’t put a full stop at his heroic inning there, next on his list was the Ashes campaign. Pulling off 441 runs in 10 innings, he became the second-most successful batsmen for the team after Steve Smith. He received the 2 ‘Player of the Match’ title along with grabbing Player of the Series, as the Ashes 2019 tournament ended up in a draw.

Known to be one of the most explosive and aggressive all-rounders, Stokes has that hunger and commitment for the game that makes one, a champion. Making name into the domestic cricket from a very young age to ruling the international cricket with his passionate gaming style, Ben has made it big in the world of cricket.

With stats of 232 runs in 23 matches at a Strike rate of 130.94 in the shortest format of the game, and 635 runs in 34 matches of one of the most-celebrated cricket leagues, IPL, Stokes is the king of the short format games. He knows how to perform under pressure, and that is what reflects his passion for the game.

Master of All Trades

His fascinating energy, hard-hitting shots, and super-fast bowling style, all justify the title ‘Master of All Trades.’ He knows when to swing the bat with full power & escape with a boundary, and when to roll a superfast ball that will simply knock-off the opponent.

Be it red ball cricket or the white ball one, Stokes knows how to tackle his opponents and emerge victorious in every situation. The list of achievements and heroic innings recorded in golden letters under Stokes’ name in the book of cricket history, is almost never-ending. This was a small tribute to the passionate and terrific performances of the player that are definitely going the rule the cricket world in coming times.