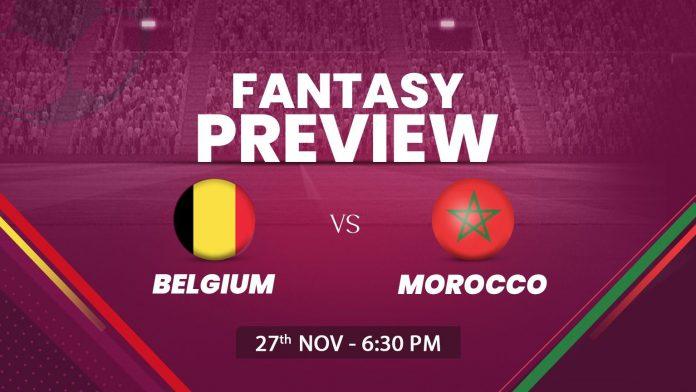 Belgium is leading Group F with 3 points in their bag. While Croatia is at number two, Morocco is struggling at the number three spot on the table. The upcoming battle of Belgium vs Morocco would be an interesting match to watch! Belgium’s explosive forward players will face the wall-like defenders of Morocco. Let’s look at the fantasy team prediction for the match! Read till the end if you want to see suggested fantasy XIs.

The Belgium team found itself in a tough spot in the last match against Canada. In what was supposed to be a one-sided match, the Belgium team struggled to maintain balance for most of the game. Eventually, Belgium won the match after scoring just one goal The attacking pace of R. Lukaku is missing from the squad.

Morocco faced Croatia in their first match. While many fans speculated that Croatia would easily beat the Moroccon side, Morocco surprised many by keeping the score 0-0 till the end of the game. The upcoming match between Belgium and Morocco would be a crucial one to watch as both teams would like to win the match and move further to the Round of 16.

The Belgium-Morocco match of the Football World Cup 2022 will take place at the Al Thumama Stadium at 6:30 PM IST. The stadium has a seating capacity of over 40,000 spectators. So far, the stadium has hosted three World Cup matches. In the last match, the stadium witnessed a massive number of fans in the stadium – 41,797 fans.

K. De Bruyne (Belgium): K. De Bruyne was awarded the man of the match award in the last match against Canada. Byuyne has been playing brilliantly in the Premier League and his form is with him in this Football World Cup 2022.

S. Boufal (Morocco): The 29-year-old winger played really well in the last match against Croatia. Playing for his national team, S. Boufal has netted the ball six times in his 33 appearances.