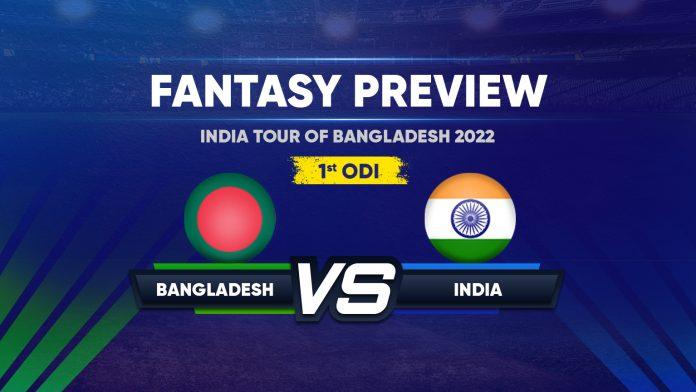 The Bangladesh vs India rivalry is one of the oldest rivalries in the history of cricket. The Men in Blue are all set to visit Bangladesh and conquer the Bangla tigers. However, it will be a tough task because Bangladesh has an excellent track record in their home. The 1st ODI will take place at the Shere Bangla National Stadium at 11:30 AM IST on 4th December. Read till the end to find out the fantasy team prediction for the match and fantasy XIs for the match.

After a not-so-impressing run in the World T20 Cup, the Bangladesh team will look forward to switching gears and going toe-to-toe against the Men in Blue.  Bangladesh wicketkeeper-batsman L. Das will be leading the squad in the first ODI. Veterans like S. Hasan and M. Rahman will also help their team to register a win against India.

India is fresh off from New Zealand. While most of the matches of that tour were washed off, the Indian team showed small cracks in their batting lineup. R. Sharma is appointed as the Indian skipper for the series, while V. Kohli is joining the team along with other players. Young express pacer U. Malik has also been added to the squad after an impressive performance against the Kiwis.

The first match of the 3-match ODI series will start from the legendary Shere Bangla National Stadium situated in the heart of Dhaka, the capital of Bangladesh. Build in 2006, the stadium has witnessed many historical events throughout its history.

The pitch at the Shere Bangla National Stadium in Dhaka has traditionally been good for batting with some assistance to spin. The pitch is a little slow, eventually, making it difficult for the batters to time the ball.

Unlike the rain-struck weather in New Zealand, the weather in Mirpur on the matchday is expected to be warm and clear.

S. Hasan (Bangladesh): S. Hasan needs no introduction. The former Bangladesh skipper has numerous successes under his belt. The world-class all-rounder will be a crucial part of the series, as he is known to trouble Indian batters with his bowling.

V. Kohli (India): V. Kohli will be making his comeback in the Indian squad after a well-deserved rest from the New Zealand tour. Kohli’s recent form has been tremendous. The former Indian skipper produced some of the best innings of his illustrious career in the World T20 Cup.

It’s now time for you to join the exciting cricket action on MyTeam11. Create your fantasy teams on MyTeam11 in Bangladesh vs India’s first ODI and stand a chance to earn big cash prizes. Furthermore, MyTeam11 is now available on Play Store and App Store! So, stop waiting and START PLAYING!